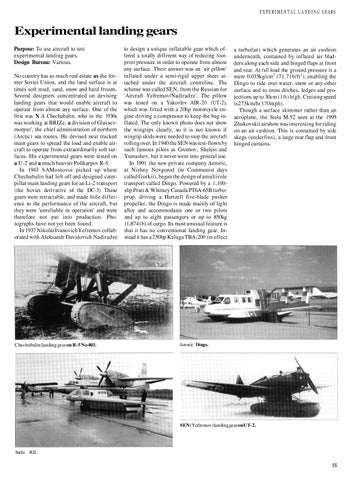 Experimental landing gears Purpose: To use aircraft to test experimental landing gears. Design Bureau: Various. No country has as much real estate as the former Soviet Union, and the land surface is at times soft mud, sand, snow and hard frozen. Several designers concentrated on devising landing gears that would enable aircraft to operate from almost any surface. One of the first was N A Chechubalin, who in the 1930s was working at BRIZe, a division of Glavsevmorput&#39;, the chief administration of northern (Arctic) sea routes. He devised neat tracked main gears to spread the load and enable aircraft to operate from extraordinarily soft surfaces. His experimental gears were tested on a U-2 and a much heavier Polikarpov R-5. In 1943 SAMostovoi picked up where Chechubalin had left off and designed caterpillar main landing gears for an Li-2 transport (the Soviet derivative of the DC-3) These gears were retractable, and made little difference to the performance of the aircraft, but they were &#39;unreliable in operation&#39; and were therefore not put into production. Photographs have not yet been found. In 1937 Nikolai Ivanovich Yefremov collaborated with Aleksandr Davidovich Nadiradze

to design a unique inflatable gear which offered a totally different way of reducing footprint pressure in order to operate from almost any surface. Their answer was an &#39;air pillow&#39; inflated under a semi-rigid upper sheet attached under the aircraft centreline. The scheme was called SEN, from the Russian for &#39;Aircraft Yefremov/Nadiradze&#39;. The pillow was tested on a Yakovlev AIR-20 (UT-2), which was fitted with a 20hp motorcycle engine driving a compressor to keep the bag inflated. The only known photo does not show the wingtips clearly, so it is not known if wingtip skids were needed to stop the aircraft rolling over. In 1940 the SEN was test-flown by such famous pilots as Gromov, Shelest and Yumashev, but it never went into general use. In 1991 the new private company Aeroric, at Nizhny Novgorod (in Communist days called Gorkii), began the design of amultirole transport called Dingo. Powered by a 1,100shp Pratt &amp; Whitney Canada PT6A-65B turboprop, driving a Hartzell five-blade pusher propeller, the Dingo is made mainly of light alloy and accommodates one or two pilots and up to eight passengers or up to 850kg (1,8741b) of cargo. Its most unusual feature is that it has no conventional landing gear. Instead it has a 250hp Kaluga TBA-200 (in effect

a turbofan) which generates an air cushion underneath, contained by inflated air bladders along each side and hinged flaps at front and rear. At full load the ground pressure is a mere 0.035kg/cm2 (71.71b/ft 2 ), enabling the Dingo to ride over water, snow or any other surface and to cross ditches, ledges and projections up to 30cm (1ft) high. Cruising speed is275km/h(170mph). Though a surface skimmer rather than an aeroplane, the Stela M.52 seen at the 1995 Zhukovskii airshow was interesting for riding on an air cushion. This is contained by side skegs (underfins), a large rear flap and front hinged curtains. 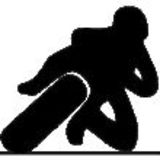