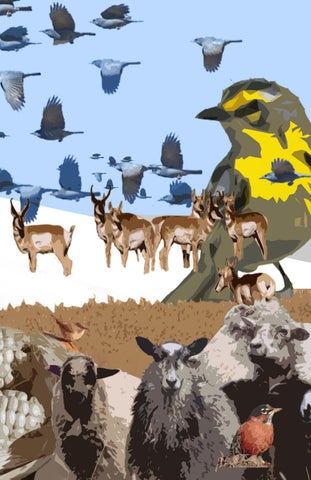 Thank you I love you I am sorry Everyone holding this zine is connecting with the lives within the sacred lands of Diné (Navajo) and Pueblo Peoples. As we begin our communications, let us fully acknowledge from where we are writing and give thanks for the living mountains, valleys, and waters, which sustain our lives, and form Diné and Pueblo ancestral homelands. Let us ground our communications in awareness of where we are and may the mannerism of Diné and Pueblo Peoples enter our lives and fill us with gratitude, love, care, and respect for all that is shared between us and all beings.

The Greater Chaco Region is a place of incredible vibrance and life. It is filled with sacredness as a homeland for indigenous peoples present, future, and past. This is an ecosystem weaving together the world of many. Of the more than human. Of plants, animals, water, air, land, soil, and the cosmos. As Daniel Tso said, “This is a critical time. The balance of nature is disrupted. This connection to nature - we already had it it’s been defined by others as ecosystem, but the (oil and gas) developers want that as ego-system.” We, Land Arts of the American West, had the privilege to explore the area, both the beauty and destruction. Representatives of the Greater Chaco Coalition showed and shared the multi-faceted issues brought by fracking to the local community. We hope to amplify the work of these people to resist the colonial imposition of big oil on their land. With this publication, we foremost want to present the abundance and magic of the Greater Chaco Region, and why it is such an important place for the people who live there and for the world. The designation of this area as a “National Sacrifice Zone” by the federal government is not only insidious, but it perpetuates the environmental racism that has been going on in New Mexico for hundreds of years. The invisible toxins that fracking operations leach into the earth, water, and the air are ubiquitous and affect both the physical and mental health of everyone who is exposed. Some of these wells exist as little as 300’ from schools and homes. The impact of this environmental violence is widespread, but it is also a very tender and intimate battle.Violence against the land is violence against the community, native women and girls, children, and the elderly. However, the scope of these issues is not confined to rural communities. Water is a shared resource and much of the water we drink is connected by complex water systems. Driving to the Counselor Chapter House, we passed the Sandoval County Line moments before we began our tour of major fracking sites in the region.This places fracking issues in the backyards of everyone in Albuquerque and Rio Rancho. This exploitation will be allowed to expand unless we fight with everything we’ve got. The land of the Greater Chaco Region is sacred and ancestral to the people living there. When oil companies ask, “Why don’t you just move,” the complexity of the issues are swept under the rug. “Leaving is not an option, this is our homeland. This is our ecosystem. It is not an ego-system.”

FRACK SHEET • The BLM admits to never analyzing the impacts of horizontal fracking on this landscape, yet they approved the lease sale of 843 more acres for drilling in January of 2017. • Over two dozen tribes still hold this region sacred. • The San Juan Basin is home to the highest concentration of methane in the United States. This has been linked to oil and gas. • In 2015, there were 4 chemical spills a day in New Mexico. • Fracking requires injecting an average of 5.5 million gallons of water into the ground per frack job per week. • San Juan County received an F from the American Lung Association for ground level ozone (smog) pollution in 2016. • Living within half a mile of a fracking pad doubles the likelihood that residents will get cancer. • In July 2016, a fracking explosion near Nageezi killed livestock and forced 55 residents to evacuate. • 91% of the public land within Greater Chaco has already been leased for oil and gas drilling. • The BLM has approved more than 400 new fracking wells without adequate tribal consultation or protections for community health, water, or climate impacts. • The BLM has proposed the sale of 4 lease parcels within 10 miles of Chaco National Historic Park. • In a May 2018 air quality assessment conducted by the Greater Chaco Coalition the levels of airborne formaldehyde were 3 times over the “threshold to consider action.” • A recent air quality assessment at Lybrook Elementary School found hydrogen sulfide levels at 7.7 ppm. The legal limit is 2.3 ppm. See FrackOffChaco.org for more information

Weâ&amp;#x20AC;&amp;#x2122;re speaking from the heart, in the hopes that it touches your heart. Motivates you to join our work.

Thank You - I Love You - I Am Sorry is one of three zines created by 2018 Land Arts of the American West artists while visiting the Greater Chaco Region in New Mexico and witnessing the racial violence, and environmental/health impacts of fracking on local communities. This project was a collaboration with visiting artist Asha Canalos and the Greater Chaco Coalition. We want to particularly thank Mario Atencio, Samuel Sage, Daniel Tso, and Beata Tsosie-Peña for meeting with us and generously sharing ways we can be of service in these efforts. Onward and in solidarity, Asha Canalos Blaise Koller Brionna Garcia Erin Gould Jeanette Hart-Mann Jessica Zeglin Kyle Holub nicholas b. jacobsen Rowan Willow Ryan Henel Sarah Canelas Xena Gurule For more information and to learn how you may help the efforts already underway, please visit the Greater Chaco Coalition @ frackoffchaco.org