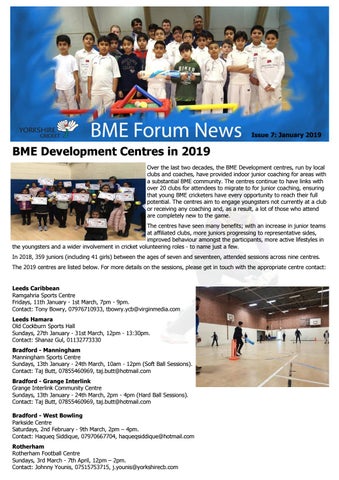 BME Development Centres in 2019 Over the last two decades, the BME Development centres, run by local clubs and coaches, have provided indoor junior coaching for areas with a substantial BME community. The centres continue to have links with over 20 clubs for attendees to migrate to for junior coaching, ensuring that young BME cricketers have every opportunity to reach their full potential. The centres aim to engage youngsters not currently at a club or receiving any coaching and, as a result, a lot of those who attend are completely new to the game. The centres have seen many benefits; with an increase in junior teams at affiliated clubs, more juniors progressing to representative sides, improved behaviour amongst the participants, more active lifestyles in the youngsters and a wider involvement in cricket volunteering roles - to name just a few. In 2018, 359 juniors (including 41 girls) between the ages of seven and seventeen, attended sessions across nine centres. The 2019 centres are listed below. For more details on the sessions, please get in touch with the appropriate centre contact:

BME community well represented in 2018 OSCAs Five members of the BME cricket community were recognised for their services to cricket in the 2018 Yorkshire Outstanding Service to Cricket Awards, held at Emerald Headingley in August. These were:

HASSAN HUSSAIN – WINNER —Young Coach of the Year Hassan has contributed greatly with the development of cricket in his community and at Hamara’s BME U11’s winter Development Centre through coaching, umpiring or administrating duties. Hassan has also worked with a new cohort of U13 girls at Cockburn High School, linked with the Hits and Missus festival. Hassan successfully organised a ‘one off’ indoor cricket tournament at Headingley Cricket Centre, designed to engage any current or new South Asian players/teams.

MOHAMMED RAFIQ – WINNER — Black Minority Ethnic Cricket Mohammed Rafiq has been a long-standing member and player at West Bowling for many years. He has helped to keep the club going in roles such as secretary, treasurer, groundsman, child welfare officer, captain and, when required, tea man! He has also served on the League Executive Committee as Disciplinary Secretary. “Uncle Raf”, as many know him, has also helped with the running of Manningham Cricket Centre in countless ways. Some of his most important work has been in conjunction with the South Asian project to ensure all the league clubs comply with child welfare issues and have nominated first aiders in place, as well as the work done within the league in setting up the Play cricket which all the league clubs now use.

SADIA ALI – WINNER — Coaching Young People Sadia has been the main reason the Yorkshire Cricket Foundation has been able to engage with so many women and girls in cricket in a short period of time. Sadia has been involved in the development of the successful new project of Hits & Missus, engaging U13 girls from nine schools . Since Hits & Missus, Sadia has developed girls only session at the Bangladesh Centre in Harehills. The session has engaged 17 girls in weekly cricket sessions from the ages 11-19. Sadia recognised the need to engage South Asian ladies to play cricket in Beeston. Sadia has 15 ladies regularly attending sessions, who have expressed an interest in competition, softball festivals and have taken upon themselves to acquire appropriate footwear, which is an enormous measure of the success. In just a matter of 10 weeks, they are now a sustained community of ‘Urban Cricket’, with plans to grow. Sadia has also delivered an All Stars community 6-week block in a Primary School. In total, Sadia has delivered to over 720 new participants.

BACHUBHAI RAMJI – HIGHLY COMMENDED — Black and Minority Ethnic Cricket In the Bradford Mutual Sunday School League, Bachubhai is a well respected man and seen as a father figure for his love of the game and for trying to ensure that cricket continues among the Indian Community in Bradford, having been at Bradford Indians Cricket Club since 1974, two years after its inception. Week in, week out, you will see him scoring and performing all the duties on and off the field. He will be the first to arrive and set up but also the last to leave, even dropping players off at work so they are not late. His passion for the sport to continue in Bradford is clear, as he still puts so much in whilst continuing to love the game that has brought him so much joy.

HAQUEQ SIDDIQUE – HIGHLY COMMENDED — Heartbeat of the Club Haqueq Siddique truly is the heartbeat of Bowling Old Lane Cricket Club and has been involved for around 35 years. Without his involvement, sheer dedication, sacrifice and immense hard work, the club would not be in existence today. His duties include sorting out players, looking out for new recruits, assessing the financial picture, raising funds, attending league meetings, sorting out all the administration, pitch/ground preparation and clubhouse, scorebox and machinery maintenance. Haqueq also arranges senior nets as well as junior coaching sessions for approximately 12 weeks from the New Year onwards, where he is also a qualified cricket coach and a member of the Yorkshire Cricket Board BME forum. Haqueq runs the Under 13’s team and the Under 15’s team as well as an All Stars group for the 5 to 8 year olds. This is real dedication and what makes him a true heartbeat of the club through and through.

Bradford Park Avenue Festival Week Park Avenue, a disused cricket ground that has hosted 306 First-Class matches since 1881 but has lain fallow for 21 years, hosted the inaugural ‘Park Avenue Bradford Community Festival’ by staging a series of matches with local community groups. Sponsored by principal YCCC partner Mazars and official partner Shire Beds, the event was designed to showcase the county club’s ability to engage with diverse communities, as well as actively promoting the ECB’s South Asian

strategy. The festival emphasised Yorkshire and the ECB’s commitment to returning First-Class cricket to the famous old venue. It gave the best non-professional South Asian cricketers in Yorkshire the opportunity to put their skills to the test against the MCC, while on the Monday the best women had taken on the Armed Forces. The event was preceded by a host of school’s cricket festivals in late June where the young cricketers of tomorrow could sample the delights on playing on a hopefully first-class ground. Steve Painter, School Games organizer for Bradford West, commented on the schools and staff all enjoyed the occasion with good weather and loud music to which added to the party atmosphere on the day. Below is a breakdown of an action-packed week: •

Nasa Hussain, groundsman and the Yorkshire Cricket Foundation’s Community Development Officer for Bradford, described the Festival as “an amazing week that profiled the accessibility of the ground at Bradford Park Ave and

also showed the diverse community and abilities we are engaging within Bradford to give access to the game of cricket whilst also profiling the image of Yorkshire Cricket (Club, Foundation and Board).“

mation on all aspects of safe guarding and coaching made it thoroughly enjoyable and we’ll be looking forward to the next step—which will be the coaching young children course to be held in February.” A total of 21 attended, along with students from Bradford College, who came to watch and learn — many hoping to take up a later course and volunteer. Three young female cricketers from the community played their part in the course, proving cricket and coaching can be

“the girls gave the others a run for their money when taking part in various aspects of the course and, with the ECB looking to promote woman and girls cricket, it was great to see.” played by all. Tutor, Shiv Krishan, later said that

The course provided an opportunity to promote the coaching and volunteering aspects of the game with candidates from a wide spectrum of communities — many from the South Asian backgrounds — and ensure clubs survive and prosper.

Leeds Diverse Communities Update Leeds has been given the opportunity to pilot a new initiative to provide an opportunity to upskill 60-76 disadvantaged youngsters with the chance to pass their Level 1 coaching qualification in cricket, in conjunction with the Darren Gough and the Sir Stanley Matthews Foundation—equipping them with life skills, increased confidence and an employment avenue. The project was open via an offer of expression of interest, in partnership with the Local Authorities, clubs and

strong community links. 20 young people were recruited, living in what’s considered to be the most deprived areas of Leeds, Beeston & Harehills. The funding targets young people aged between 16-21 years old, who have an interest in cricket coaching and/or leadership. Two ECB Level 1 Cricket Support Worker courses were organised and facilitated, achieving a 100% pass rate. In addition, a free First Aid course for all new qualified coaches was also provided The newly qualified coaches were all assigned an experienced Level 2 cricket coach to shadow and be mentored throughout their 20 voluntary hours. This has given the newly qualified coaches the invaluable, real-life experiences in coaching youngsters in the community. The new coaches will need to be mindful of the social, economic and community issues, so the Yorkshire Cricket Foundation provided six optional awareness community coaching workshops, to help share considerations and resolutions that may be relevant. With 20 coaches, each contributing 20 hours of volunteering, 400 hours were given back to the community within three months. Once they have completed their 20 hours, they will have the opportunity to apply for a paid position as a casual support coach for Leeds City Council and the Yorkshire Cricket Foundation, with the next progression being the Level 2 Cricket Coaching in March, leading into the World Cup activation in parks. Elsewhere in Leeds, the new Leeds Street Project played their first game against Bradford. Leeds travelled to Bradford on 15th Jan and played a friendly against a local Bradford girls team. It went very well and the girls finally got a taste of competition!

“for under-21s who haven’t previously been selected on any national or county pathway programmes and will also allow a range of coaches to take a look at their talent”, is designed

according to Mohammed Arif, the ECB’s National Growth Manager for Diverse Communities. A half century from Hamza Iqbal, Bradford’s 20-year-old captain from Baildon, set up the win against Sheffield. Two players from each of the 16 cities represented in the competition, which is in its 10th summer and has been incorporated into the ECB’s South Asian Action Plan, were invited to development days at Lord’s in November. Appropriately, Iqbal was presented with the trophy by Lord Kamlesh Patel of Bradford, the ECB’s Senior Independent Director and a lifelong cricket enthusiast. The win was another feather in the cap of Yorkshire’s recent redevelopment of Park Avenue, where head groundsman Nasa Hussain – also vice-chairman of the National Asian Cricket Council – held open trials in the all-weather nets earlier this summer in an effort to unearth fresh talent.