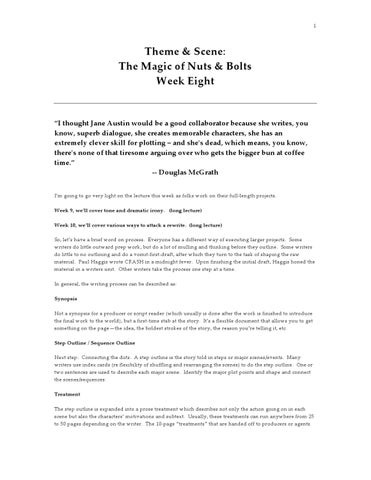 “I thought Jane Austin would be a good collaborator because she writes, you know, superb dialogue, she creates memorable characters, she has an extremely clever skill for plotting – and she&#39;s dead, which means, you know, there&#39;s none of that tiresome arguing over who gets the bigger bun at coffee time.” -- Douglas McGrath I’m going to go very light on the lecture this week as folks work on their full-length projects. Week 9, we’ll cover tone and dramatic irony. (long lecture) Week 10, we’ll cover various ways to attack a rewrite. (long lecture) So, let’s have a brief word on process. Everyone has a different way of executing larger projects. Some writers do little outward prep work, but do a lot of mulling and thinking before they outline. Some writers do little to no outlining and do a vomit-first-draft, after which they turn to the task of shaping the raw material. Paul Haggis wrote CRASH in a midnight fever. Upon finishing the initial draft, Haggis honed the material in a writers unit. Other writers take the process one step at a time. In general, the writing process can be described as: Synopsis Not a synopsis for a producer or script reader (which usually is done after the work is finished to introduce the final work to the world), but a first-time stab at the story. It’s a flexible document that allows you to get something on the page—the idea, the boldest strokes of the story, the reason you’re telling it, etc. Step Outline / Sequence Outline Next step: Connecting the dots. A step outline is the story told in steps or major scenes/events. Many writers use index cards (re flexibility of shuffling and rearranging the scenes) to do the step outline. One or two sentences are used to describe each major scene. Identify the major plot points and shape and connect the scenes/sequences. Treatment The step outline is expanded into a prose treatment which describes not only the action going on in each scene but also the characters’ motivations and subtext. Usually, these treatments can run anywhere from 25 to 50 pages depending on the writer. The 10-page “treatments” that are handed off to producers or agents

are not full treatments per se, but outlines with a thin layer of flesh to give people a sense of the story. First Draft There is usually a shuffle between treatment and draft in the first pass. You’ll find that some of the scenes that you envisioned may not work or need to be cut or reshuffled in terms of scene progression. For film writers, dialogue is one of the least important elements and yet dialogue can hold you up interminably. Many times, writers try and “fix” scenes by tinkering with the dialogue—it’s a dog chasing its own tail. Much of this course has focused on the core elements of scene structure. If you find scenes are not lifting off the page, check your set-ups. Rewrites – 1st pass, 2nd pass, 3rd pass, etc. Writing is rewriting. In general, multiple passes (drafts) are required to strengthen a particular character, hone scenes, clarify events, and sharpen language. When you’re comfortable with a draft, you should try and hand the draft to at least two readers in the industry and one layperson for feedback. Again, guide your readers by asking a few major questions that will keep them focused on those areas of your script that you think might need more work. Every writer develops their own method of working over time. There is no one sure-fire route. As well, some projects may shoot out of you in weeks whilst others take years.

CHOICE A: The “Period” Scene Whether it’s the Dark Ages or World War II or Vietnam, the scene must be informed by the customs, language, beliefs, and socio-economic factors of that period. It requires that you develop a greater facility with language and visuals, not to mention a bit of research.

ASSIGNMENT B: Continue to work on beat sheets (outlines) for your full-lengths! NOTE: Since we are not all using the same hardware or software, please make sure to post your submissions in Rich Text File or PDF.

The step outline is expanded into a prose treatment which describes not only the action going on in each scene but also the characters’ motivations and subtext. Usually, these treatments can run anywhere from 25 to 50 pages depending on the writer. The 10-page “treatments” that are handed off to producers or agents Treatment Synopsis Step Outline / Sequence Outline Week 9, we’ll cover tone and dramatic irony. (long lecture) In general, the writing process can be described as: 1