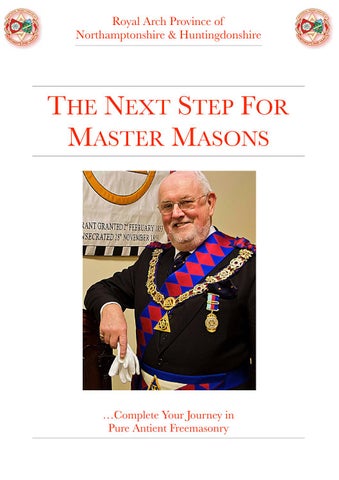 THE NEXT STEP FOR MASTER MASONS

WHY JOIN THE HOLY ROYAL ARCH? The Royal Arch is the culmination of that four-staged journey through “Pure Antient Masonry” as confirmed in the Preliminary Declaration on Page 1 of the Book of Constitutions following the Act of Union in 1813 between the two opposing Grand Lodges at that time. In common with Craft Masonry, the Royal Arch is open to men of all faiths. Having been raised to the Sublime Degree of a Master Mason, you are now eligible to be exalted into the Supreme Degree of the Holy Royal Arch, more familiarly known as Chapter, and thereby to become a Companion of the Order. Craft Masonry teaches us a moral code by which we should conduct our lives based on the Five Points of Fellowship and the three great principles of Brotherly Love, Relief and Truth but a Candidate having proclaimed from the outset a belief in a Supreme Being, the Craft does not explore this relationship. In the Royal Arch, however, we take our researches a little further and additionally recognise a man’s spiritual needs, thereby focusing on his spiritual well-being, his spiritual awareness with his God, his Supreme Being, in whatever form this presents itself to him. Thus the Royal Arch leads us from the practical to the spiritual aspects of our earthly existence - a fascinating journey of self-knowledge and self discovery beginning with the Entered Apprentice Degree in the Craft and culminating in the First Principal’s Chair of his Holy Royal Arch Chapter. The Royal Arch therefore can justly claim to be the fulfilment of “Pure Antient Masonry”, the very completion of Craft Masonry itself and no Brother can consider his Masonic knowledge complete until he has become a Companion of the Supreme Order.

THE ESSENCE OF FREEMASONRY The Masonic story cannot be considered complete after the tragic ending of the Third Degree – the untimely death of our Master, Hiram Abif, at the East Gate and at the hands of three unscrupulous characters. There has to be a happier ending and in fact, the Third Degree in Craft gave many a hint that there was surely something else to follow But as a consequence, the genuine secrets of a Master Mason remained lost for a period of almost 500 years. Yet after the darkness of the Third Degree, they are set to be rediscovered in somewhat dramatic form in the beautiful and colourful ceremony of exaltation into the Holy Royal Arch. In the fullness of time therefore, we invite you to explore and seriously consider exaltation into the Holy Royal Arch by which means you too can then complete your journey through “Pure Antient Masonry”. You won’t regret it and you too will then appreciate why the Royal Arch can be rightly considered the Supreme Degree, the very essence of Freemasonry itself, the foundation and keystone of the whole Masonic structure.

WHERE DID IT BEGIN? The origins are uncertain. It has been suggested that it began in France as one of the large number of chivalric Orders which were prevalent just a few centuries ago. But perhaps more convincingly and confirming a certain Irish influence, brief references to Royal Arch vocabulary appear in Masonic literature from the 1720’s, with the first authoritative reference to the Royal Arch appearing in Ireland in the 1740’s on the occasion of a certain Dublin procession. Laurence Dermott, an Irishman who was later to become Grand Secretary of the Antients Grand Lodge, was soon to become a very influential figure in establishing Royal Arch Masonry in England, having been exalted into his own Dublin Chapter in 1746. Early, first references to the Royal Arch in England seemed to date back to the mid-18th Century therefore when the ritual was first practiced as a fourth Degree by the Antients in their Craft Lodges. Today, Supreme Grand Chapter – our governing body and, like the Craft, also based at Great Queen Street in London – is composed of some 3,000+ Royal Arch Chapters and accounting for a membership of well over 100,000. Worldwide, it could be argued that total membership could well be around 1.5m Royal Arch Companions. You will find within Northamptonshire & Huntingdonshire 28 Chapters, each one attached to a sponsoring Craft Lodge bearing the same number and in the majority of cases, sharing the same name.

A ROYAL ARCH CHAPTER A Chapter will usually meet three/four time a year – our Meetings are referred to as Convocations. Exaltation Fees and Annual Subscriptions are considerably less than those of a Craft Lodge. Charitable donations are usually restricted to the Chapter Alms collection and as the Holy Royal Arch is so indissolubly linked to the Craft, we look to assist our Craft Lodges as best we can in their endeavours whenever the Craft Province is engaged in a Festival Appeal. We have no nominated Festivals of our own. When comparing the workings of a Chapter to those of a Craft Lodge, indeed there are certain similarities but without doubt, the ceremony of Exaltation itself is quite different. There is a progression of Officers as one works towards the three Chairs of the Chapter Principals who govern the Chapter in a similar manner to the Master and his Wardens in your Craft Lodge. There will be no pressure for any newly exalted Companion to progress through the Chapter offices or engage himself in the ritual until he is confident enough to do so. You will know when you are ready to participate and will make it known at the appropriate time.

Most Companions are encouraged just to attend, listen and observe â&#x20AC;&#x201C; familiarise themselves with the workings of the Chapter and appreciate the significance of the Order as the fourth and final stage of Pure Antient Masonry. A Grand Officer of Supreme Grand Chapter or a senior Provincial Officer will serve as your locally nominated Mentor. Be assured, you will develop new friendships as you progress. Some newly exalted Companions however are anxious to participate in our ceremonies virtually from the outset and enjoy doing so. That is fine as no longer do you have to be a Past Master of your Lodge in order to qualify for the three Chairs in your Chapter. You will know however when you personally are ready to participate, perhaps just in a small way initially, but, in the first instance, the most important consideration is for you to be a member, a Companion of our Order, and enjoy the companionship which awaits you.

STRUCTURE & ADMINISTRATION The Supreme Degree of the Holy Royal Arch is the only other Order which is formally recognised by the United Grand Lodge of England; undeniably it is an integral part of Pure Antient Masonry and the very completion of Craft Masonry itself. There are 47 Royal Arch Provinces operating under Supreme Grand Chapter in England and Wales with a number of Districts overseas. Under the formal appointment of the First Grand Principal, HRH The Duke of Kent, Provinces are managed and led by a Grand Superintendent ably assisted by a Deputy, and a 2nd and 3rd Provincial Grand Principal. Details and contact numbers etc can be found on the appropriate pages of the Provincial Year Book. Each year the Royal Arch Province will hold an Annual Convocation â&#x20AC;&#x201C; the equivalent of the Annual Meeting held in Provincial Grand Lodge in Craft Masonry. Appointments and Promotions in Provincial Grand Rank are made to worthy recipients. You will always recognise a Royal Arch Mason in Craft Lodges by the distinctive breast jewel which they proudly wear. The design is based on the Seal of Solomon with a white ribbon for a Companion, a red ribbon for a Principal or Past Principal and a tri-coloured ribbon for a Provincial or Grand Officer.

After your Third Degree raising in the Craft, unquestionably your next step has to be exaltation into the Supreme Degree of the Holy Royal Arch. There are of course other worthy Orders of Freemasonry for you to consider in due course but if you are to adopt the correct and proper procedure, then the next progression has to be, without question, exaltation into the Supreme Degree.

WHICH CHAPTER & HOW TO JOIN? There is no hard and fast rule – most Brethren prefer to join the Chapter associated with their Mother Lodge where possibly they are already best known; others however choose to broaden their Masonic circle by joining a Chapter at another Centre. The choice will be yours; either way, you are assured of a warm welcome. Each Chapter is listed in the Provincial Year Book with a full list of its members and with contact details of the Chapter Scribe E – the equivalent of your Craft Lodge Secretary. He will be delighted to hear from you. Alternatively, you are welcome to contact direct the Provincial Grand Scribe E – he will be only too pleased to help you in any way. His contact details you will also find in the Provincial Year Book. And to guide you further, your local Grand Officer of Supreme Grand Chapter or senior Provincial Officer – no doubt already well known to you – will make contact and help you along the way. They are Royal Arch Companions of some experience and seniority and will further explain the concept of the Holy Royal Arch, its positioning in Pure Antient Masonry and why it is the next step you should take. So, we invite you to reflect on what you have just read – thank you for taking the time and interest to browse through our leaflet. It is produced to bring to your immediate attention that Freemasonry does not end at the conclusion of your Third Degree in the Craft – an end which experiences anguish, grief and death. Celebrate with us the happy ending you will discover in the colourful and enlightening ceremony of exaltation into your chosen Holy Royal Arch Chapter.

Copyright ©  2016  by  Province  of  Northamptonshire  &  Huntingdonshire.   All  rights  reserved.  This  book  or  any  portion  thereof  may  not  be  reproduced   or  used  in  any  manner  whatsoever  without  the  express  written    permission  of  the  publisher. Next Step For Master Masons

Next Step For Master Masons