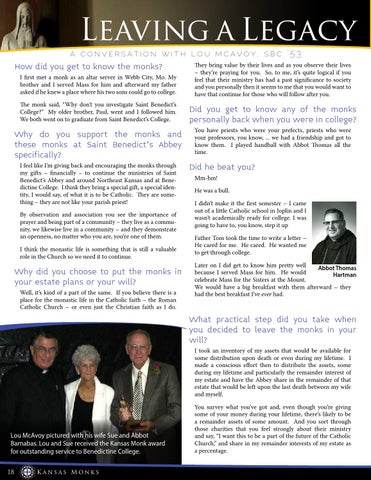 a conversation with lou mcavoy, sbc ‘53 They bring value by their lives and as you observe their lives How did you get to know the monks? I first met a monk as an altar server in Webb City, Mo. My brother and I served Mass for him and afterward my father asked if he knew a place where his two sons could go to college.

– they’re praying for you. So, to me, it’s quite logical if you feel that their ministry has had a past significance to society and you personally then it seems to me that you would want to have that continue for those who will follow after you.

Did you get to know any of the monks personally back when you were in college?

Why do you support the monks and these monks at Saint Benedict’s Abbey specifically?

I feel like I’m giving back and encouraging the monks through my gifts – financially – to continue the ministries of Saint Benedict’s Abbey and around Northeast Kansas and at Benedictine College. I think they bring a special gift, a special identity, I would say, of what it is to be Catholic. They are something – they are not like your parish priest! By observation and association you see the importance of prayer and being part of a community – they live as a community, we likewise live in a community – and they demonstrate an openness, no matter who you are, you’re one of them. I think the monastic life is something that is still a valuable role in the Church so we need it to continue.

Why did you choose to put the monks in your estate plans or your will? Well, it’s kind of a part of the same. If you believe there is a place for the monastic life in the Catholic faith – the Roman Catholic Church – or even just the Christian faith as I do.

Did he beat you? Mm-hm! He was a bull. I didn’t make it the first semester – I came out of a little Catholic school in Joplin and I wasn’t academically ready for college. I was going to have to, you know, step it up Father Tom took the time to write a letter – He cared for me. He cared. He wanted me to get through college. Later on I did get to know him pretty well Abbot Thomas because I served Mass for him. He would Hartman celebrate Mass for the Sisters at the Mount. We would have a big breakfast with them afterward – they had the best breakfast I’ve ever had.

What practical step did you take when you decided to leave the monks in your will? I took an inventory of my assets that would be available for some distribution upon death or even during my lifetime. I made a conscious effort then to distribute the assets, some during my lifetime and particularly the remainder interest of my estate and have the Abbey share in the remainder of that estate that would be left upon the last death between my wife and myself.

You survey what you’ve got and, even though you’re giving some of your money during your lifetime, there’s likely to be a remainder assets of some amount. And you sort through those charities that you feel strongly about their ministry and say, “I want this to be a part of the future of the Catholic Church,” and share in my remainder interests of my estate as a percentage.

In this issue of Kansas Monks we remember Fr. Kevin Bachmann, the monks tell us why they serve, Fr. Daniel McCarthy talks about his new book, and much more. 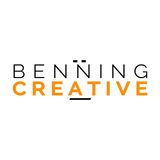