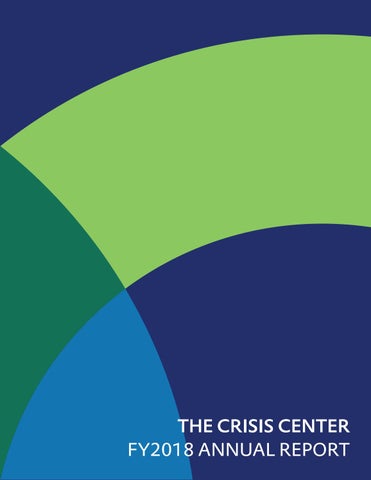 DEAR FRIENDS, Just when we thought we couldn’t grow any faster, we have done just that, in both our Food Bank and Crisis Intervention Programs. In fiscal year 2018, we completed the expansion of our food bank warehouse (read more on p. 3). Also in FY18, we embarked on a new endeavor to expand our ability to reach Iowans in crisis. Last fall, we learned that the National Suicide Prevention Lifeline is only able to respond to 9 percent of incoming chats. This means that, nationally, 91 percent of people experiencing a mental health crisis receive no response. We cannot accept this. We have to ensure people in our state are receiving the help they need. In response, we began doing outreach to schools and organizations across Iowa, letting them know The Crisis Center is here for ALL Iowans. To respond to an increased volume of chats, we developed an online training for new volunteers. This allows us to recruit and train crisis chat volunteers from every corner of the state. A small training class of about 10 volunteers has started the trial version of the online training. We have developed partnerships with two private colleges: St. Ambrose University in Davenport and

Briar Cliff University in Sioux City. Both schools, after seeing what we’ve accomplished with the University of Iowa community, recognize that our volunteer program is an excellent professional development opportunity for their students. We are excited to see how these partnerships develop and what other schools will partner with us in the future. Almost 50 years ago now, when The Crisis Center was first launched by two UI students looking to increase the options available to those in need of mental health support, they never could have anticipated the reach of the organization. They laid the foundation and created services in a community where there were almost none. Their success has provided a model for the work we are doing next; sharing mental health resources across the state of Iowa, community by community, when people need it most. Thank you for your part in The Crisis Center’s journey.

With excitement and appreciation, CHRISTINE CATNEY

Bob Fitzsimmons has volunteered in the food bank warehouse since 2013. In FY18, 275+ food bank volunteers donated 25,010 hours of their time, providing an additional $600,000 value to the food bank and making its programs possible.

A CLOSER LOOK AT

donated by Table to Table

SERVING MORE PEOPLE, BETTER On August 16, 2017, The Crisis Center announced it was taking on a major endeavor: a year-long campaign to expand the food bank warehouse. Exactly one year later, on August 16, 2018, the community celebrated its completion. Every aspect of the project was made possible by generous businesses, groups, and individuals. From the University of Iowa Community Credit Union who kicked off the project with a $45,000 community match to Adamantine Spine Moving who finished up the last leg of the project with a $25,000 match. Grants played a major role as well. The City of Iowa City contributed a $95,000 Community Development Block Grant. Another grant from Rotary International and the Rotary Club of Iowa City Downtown funded a walk-in cooler to hold a wider variety of fresh, healthy foods. Sustainability Grants from Johnson County funded a new energy-efficient air conditioner and furnace as well as windows and LED lighting—all estimated to provide The Crisis Center about $5,000 per year in energy savings. With the help of incredible community partners like

the University of Iowa Community Credit Union and Adamantine Spine Moving, The Crisis Center overcame an unexpected cost increase, raising $100,000 more than was anticipated when starting the campaign. Thanks to amazing, flexible staff and volunteers, the food bank never once had to close during construction. It was a little cramped from time to time, but we never stopped providing services to the nearly 13,000 clients who count on it to meet their food needs each week. Dianne Cahalan Salling, who has volunteered in the food bank for four years now, says that it used to be difficult to find the food items she was looking for in the warehouse. “Now it’s so organized that it almost looks empty sometimes!” she said. Clients also now have a much better experience. More space in the warehouse has also meant more space in the client shopping area where they choose the food items that suit their families’ needs. “Since the construction, everything has been great,” said Frank, a food bank client. “It’s a lot quicker and easier to get food here now.”

“THE CRISIS CENTER SAVED MY LIFE.”

Caring Hands &amp; More, has been a successful local business for more than 10 years now, but the road wasn’t always easy for owner Bruce Teague. Back in 2007, in its third year, the business started to grow quickly. Suddenly, everything felt unmanageable. “Unbeknownst to me, managing all of those components was taking a serious toll,” Teague said. Teague started to isolate himself down in the basement of his home. At first, he was unable to eat or sleep, then just living became even more difficult. He started losing weight and he even went without sleeping for nine days straight. He began to dream of jumping off a bridge, feeling that it would be “easier to be gone than to be a failure.” That’s when Teague called The Crisis Center’s crisis line for the first time. “I don’t know who I talked to, but I immediately felt a sense of connection,” he said. “I had a place I could go where I could tell my story.” He didn’t remember what they talked about, but he remembers wanting to call back. And he did. Whenever his thoughts of suicide returned, no matter what time of day or night, he was able to call and get help from

staff and volunteers. Sometimes when he called, he didn’t even want to talk—he just didn’t want to be alone and the person on the line would stay on the phone and check with him every half hour. Eventually, through multiple conversations over a two-week period, they helped him get the point where he could leave his home and meet with a volunteer in person through The Crisis Center’s walk-in counseling program. Together, they made a plan for what he would do when he had suicidal thoughts –talk to roommates or call a friend. “It was so basic, but The Crisis Center saved my life,” he said. Teague no longer considers himself depressed, but he still pays special attention to his mental health. He still uses a strategy he developed with The Crisis Center during his darkest days. Every time someone asks, “How are you?” Teague takes a second to check on his mental health. Most days he feels “awesome and amazing” but he knows what he needs to do when he’s not feeling that way so he never “goes back to the basement” again.

CRISIS A CLOSER LOOK AT

of MCO clients were diverted from hospitals and jails

Jeremy James, owner of James Investments, is The Crisis Center’s FY19 board chair. “When you see the numbers, it’s hard not to grow in commitment to this organization,” he said.

Jeremy James, owner of James Investment Group and Certified Financial Planner, said he considers himself a “numbers person.” In fact, numbers are what drew him to serve on The Crisis Center Board of Directors. “When I learned the number of people – the number of children in our community who are food insecure, and the number of people in need of emotional support–I knew I had to be a part of this organization.” When James first joined the Board of Directors in 2013, he had only a surface knowledge of all the services provided by The Crisis Center. As he learned more, though, he became increasingly committed to helping fulfill The Crisis Center’s vision that everyone in our community has support in their time of need. “The staff and volunteers work so hard and are so passionate,” James said. “This organization is so easy to trust and want to invest in.” James doesn’t just invest his time; he has also grown as a donor, making gifts to the warehouse remodel project and the Hunger Banquet, as well as joining Mission Circle, The Crisis Center’s monthly giving program.

“When you see the numbers, it’s hard not to grow in commitment to this organization,” said James. It wasn’t just the number of people served that moved him. It was also The Crisis Center’s Hunger Banquet, the annual event to raise funds and awareness for the food bank. Both years of the event, James has been the one at the table without a meal. Though others at the table tried to share, he refused. “It made a profound impact on me,” James said. “I can’t imagine doing that every night, but there is an unacceptable number of people in our community who do experience that regularly and are unable to get their nutritional needs met.” As the fiscal year 2019 board chair, James feels he will make a major difference in the community. “This is an exciting time to be part of The Crisis Center board and I feel like I’ll have the opportunity to be part of launching some very exciting new programs, like the expansion of crisis chat across the state,” James said. “It’s just very exciting to see these programs from their infancy.”

FINANCIALS A CLOSER LOOK AT

* denotes a donor who passed away this year A complete list of individual donors of $500+ can be found on our website.

FY18 BOARD OF DIRECTORS BOARD CHAIR Christine Catney

Learn what happened in The Crisis Center community over the past year (FY2018) in this annual publication. 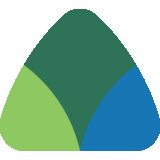