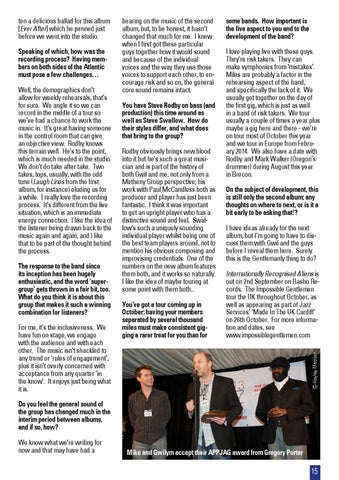 Speaking of which, how was the recording process? Having members on both sides of the Atlantic must pose a few challenges… Well, the demographics don’t allow for weekly rehearsals, that’s for sure. We angle it so we can record in the middle of a tour so we’ve had a chance to work the music in. It’s great having someone in the control room that can give an objective view. Rodby knows this terrain well. He’s to the point, which is much needed in the studio. We don’t do take after take. Two takes, tops, usually, with the odd tune (Laugh Lines from the first album, for instance) eluding us for a while. I really love the recording process. It’s different from the live situation, which is an immediate energy connection. I like the idea of the listener being drawn back to the music again and again, and I like that to be part of the thought behind the process. The response to the band since its inception has been hugely enthusiastic, and the word ‘supergroup’ gets thrown in a fair bit, too. What do you think it is about this group that makes it such a winning combination for listeners? For me, it’s the inclusiveness. We have fun on stage, we engage with the audience and with each other. The music isn’t shackled to any trend or ‘rules of engagement’, plus it isn’t overly concerned with acceptance from any quarter ‘in the know’. It enjoys just being what it is.

bearing on the music of the second album, but, to be honest, it hasn’t changed that much for me. I knew when I first got these particular guys together how it would sound and because of the individual voices and the way they use those voices to support each other, to encourage risk and so on, the general core sound remains intact. You have Steve Rodby on bass (and production) this time around as well as Steve Swallow. How do their styles differ, and what does that bring to the group? Rodby obviously brings new blood into it but he’s such a great musician and is part of the history of both Gwil and me, not only from a Metheny Group perspective; his work with Paul McCandless both as producer and player has just been fantastic. I think it was important to get an upright player who has a distinctive sound and feel. Swallow’s such a uniquely sounding individual player whilst being one of the best team players around, not to mention his obvious composing and improvising credentials. One of the numbers on the new album features them both, and it works so naturally. I like the idea of maybe touring at some point with them both... You’ve got a tour coming up in October; having your members separated by several thousand miles must make consistent gigging a rarer treat for you than for

some bands. How important is the live aspect to you and to the development of the band? I love playing live with these guys. They’re risk takers. They can make symphonies from ‘mistakes’. Miles are probably a factor in the rehearsing aspect of the band, and specifically the lack of it. We usually get together on the day of the first gig, which is just as well in a band of risk takers. We tour usually a couple of times a year plus maybe a gig here and there - we’re on tour most of October this year and we tour in Europe from February 2014. We also have a date with Rodby and Mark Walker (Oregon’s drummer) during August this year in Brecon. On the subject of development, this is still only the second album; any thoughts on where to next, or is it a bit early to be asking that!? I have ideas already for the next album, but I’m going to have to discuss them with Gwil and the guys before I reveal them here. Surely this is the Gentlemanly thing to do? Internationally Recognised Aliens is out on 2nd September on Basho Records. The Impossible Gentlemen tour the UK throughout October, as well as appearing as part of Jazz Services’ ‘Made In The UK Cardiff’ on 26th October. For more information and dates, see www.impossiblegentlemen.com © Hayley Madden

ten a delicious ballad for this album [Ever After] which he penned just before we went into the studio.

Do you feel the general sound of the group has changed much in the interim period between albums, and if so, how? We know what we’re writing for now and that may have had a

Mike and Gwilym accept their APPJAG award from Gregory Porter 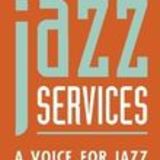 The August/September issue of JazzUK features Empirical on the cover, discussing their new double-album 'Tabula Rasa'. We also hear from Th...

The August/September issue of JazzUK features Empirical on the cover, discussing their new double-album 'Tabula Rasa'. We also hear from Th...