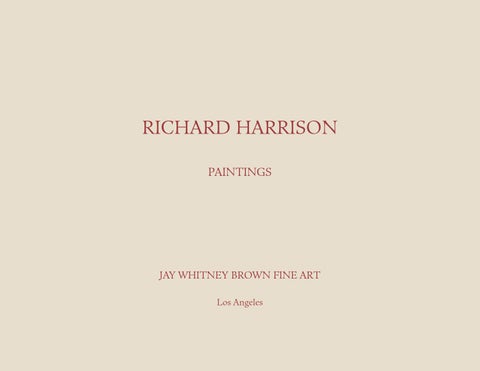 Copyright ÂŠ 2015 by Jay Whitney Brown Fine Art All rights reserved. This book or any portion thereof may not be reproduced or used in any manner whatsoever without the express written permission of the publisher except for the use of brief quotations in a book review. Printed in the United States of America First Printing, 2015 ISBN 978-0-692-51186-2 JWB Press Los Angeles www.jaywhitneybrown.com

ichard Harrison, on whom, five years ago, I wrote a book, “Nothing Wasted: The Paintings of Richard Harrison”, has requested that I allow myself to be described as the curator of this latest exhibition. I have respectfully declined. In an entirely informal way I have browsed through the recent paintings in his studio selecting some for his first one man show in the United States, rejecting others, seeking only to construct a rounded picture of his work, his subjects and his references as they are now. Five years ago my choice would have been different and five years hence it will again be different, for by then he will have moved on. In this limited sense I am indeed the curator, but a curator’s proper task is to see more than can be seen in the work of three or four years, to set it in the context of the whole work, even to set it in the wider context of western art and its historical influences – and that, of course, is the retrospective exhibition in which we look back to the beginning of a painter’s career and trace it, step by step, until we reach the present day. This exhibition is not a retrospective; it is of the moment; it is of Richard Harrison’s work as it is now – as has been the case with the more than forty exhibitions that preceded it. What the viewer has before him is a glimpse of Harrison at work today,

his pictures big, bold, beautiful and threatening. He began thirty years ago as an abstract painter with a convincing interest in texture, not only of paint, but even of the canvas on which he painted, which he frequently burned or charred; in these, though they represented nothing, there was a mysterious link with the Rococo paintings of the eighteenth century. He then moved on through landscape and the figure to the subjects with which artists were content for half a millennium, from the Renaissance in Italy in the fifteenth century until the last years of the Victorian Olympus that flourished in England and Germany until the outbreak of the first World War, taken from the Bible and classical mythology. Now these narratives are less important – it is enough to reduce mankind to a symbolic figure struggling with abstract forces of man’s romantic imagination, or even to reduce the subject to the hostility of landscape. I was on Mount Etna in Sicily when it last erupted (as we knew it might) and knew perfectly well what must be done if one is to survive such a threatening circumstance; now, as then, no one who has felt his boots burning as he scrambles away from flowing lava needs an explanation of Harrison’s landscapes. They are of a primeval world much larger, wilder and more threatening than that familiar to our ever-increasing mankind now. Are Earth’s eruptions, whether of her caparison of ice or molten

rock from her inner core, her protests against the impertinent interventions of the men and women who occupy her surface? In Harrisonâ&#x20AC;&#x2122;s paintings I sense a fitting hopelessness at the thought of manâ&#x20AC;&#x2122;s futility when confronted with the world as we know it in this new century. With ease we can look back over the past ten thousand years or so at our early civilizations, superstitions and beliefs, but in the past hundred years we humans have changed the world beyond recognition, have urbanized it to accommodate our increasing numbers, reducing to almost nothing the habitats of other creatures. In another hundred years will there still be the lion and the polar bear, the whale and the elephant, the albatross and the vulture? Harrison looks back to the Classical and romantic past of western civilization all about us in our history, and forward to a new emptiness, a new beginning, the human race all but wiped out by a globe rebelling against our ubiquity. In this there is hope that the few who survive to construct the new world from the old will remember the ruin brought about by manâ&#x20AC;&#x2122;s greedy thoughtless presence everywhere. It will be a mighty cleansing. We should see Harrison as a visionary prophet, young and formidable in mind, a painter of undiminishing turbulent enquiry with all the advantages of practice, education, maturity and broad experience. Many may agree with this feeling for his work while disagreeing with my deeper interpretation. So be it. By all means see him only as a painter. Live with the marks and colours of his brush. Slowly become aware of words forming in your mind. Some of these words will be mine. Brian Sewell London 2015

BRIAN SEWELL has since 1984 been the art critic of the London Evening Standard and one of its political columnists, winning national and international press awards in both spheres. He contributes to magazines and broadcasts on radio and television. Exhibition Catalogue of 32 paintings by Richard Harrison, with introduction by Brian Sewell.

Exhibition Catalogue of 32 paintings by Richard Harrison, with introduction by Brian Sewell.