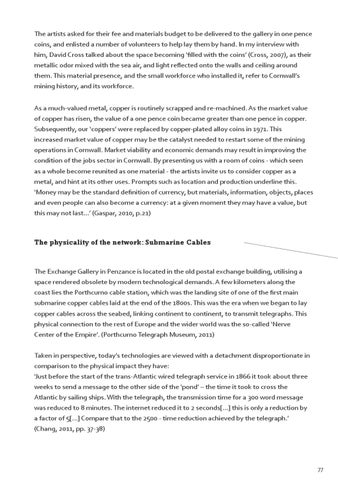 The artists asked for their fee and materials budget to be delivered to the gallery in one pence coins, and enlisted a number of volunteers to help lay them by hand. In my interview with him, David Cross talked about the space becoming ‘filled with the coins’ (Cross, 2007), as their metallic odor mixed with the sea air, and light reflected onto the walls and ceiling around them. This material presence, and the small workforce who installed it, refer to Cornwall’s mining history, and its workforce. As a much-valued metal, copper is routinely scrapped and re-machined. As the market value of copper has risen, the value of a one pence coin became greater than one pence in copper. Subsequently, our ‘coppers’ were replaced by copper-plated alloy coins in 1971. This increased market value of copper may be the catalyst needed to restart some of the mining operations in Cornwall. Market viability and economic demands may result in improving the condition of the jobs sector in Cornwall. By presenting us with a room of coins - which seen as a whole become reunited as one material - the artists invite us to consider copper as a metal, and hint at its other uses. Prompts such as location and production underline this. ‘Money may be the standard definition of currency, but materials, information, objects, places and even people can also become a currency: at a given moment they may have a value, but this may not last…’ (Gaspar, 2010, p.21)

The physicality of the network: Submarine Cables

The Exchange Gallery in Penzance is located in the old postal exchange building, utilising a space rendered obsolete by modern technological demands. A few kilometers along the coast lies the Porthcurno cable station, which was the landing site of one of the first main submarine copper cables laid at the end of the 1800s. This was the era when we began to lay copper cables across the seabed, linking continent to continent, to transmit telegraphs. This physical connection to the rest of Europe and the wider world was the so-called ‘Nerve Center of the Empire’. (Porthcurno Telegraph Museum, 2011) Taken in perspective, today’s technologies are viewed with a detachment disproportionate in comparison to the physical impact they have: ‘Just before the start of the trans-Atlantic wired telegraph service in 1866 it took about three weeks to send a message to the other side of the ‘pond’ – the time it took to cross the Atlantic by sailing ships. With the telegraph, the transmission time for a 300 word message was reduced to 8 minutes. The internet reduced it to 2 seconds[…] this is only a reduction by a factor of 5[…] Compare that to the 2500 - time reduction achieved by the telegraph.’ (Chang, 2011, pp. 37-38)