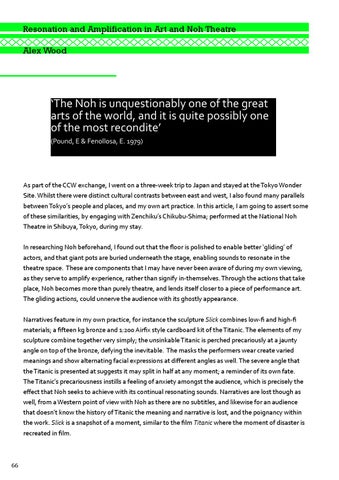 Resonation and Amplification in Art and Noh Theatre Alex Wood

‘The Noh is unquestionably one of the great arts of the world, and it is quite possibly one of the most recondite’ (Pound, E & Fenollosa, E. 1979)

As part of the CCW exchange, I went on a three-week trip to Japan and stayed at the Tokyo Wonder Site. Whilst there were distinct cultural contrasts between east and west, I also found many parallels between Tokyo’s people and places, and my own art practice. In this article, I am going to assert some of these similarities, by engaging with Zenchiku’s Chikubu-Shima; performed at the National Noh Theatre in Shibuya, Tokyo, during my stay. In researching Noh beforehand, I found out that the floor is polished to enable better ‘gliding’ of actors, and that giant pots are buried underneath the stage, enabling sounds to resonate in the theatre space. These are components that I may have never been aware of during my own viewing, as they serve to amplify experience, rather than signify in-themselves. Through the actions that take place, Noh becomes more than purely theatre, and lends itself closer to a piece of performance art. The gliding actions, could unnerve the audience with its ghostly appearance. Narratives feature in my own practice, for instance the sculpture Slick combines low-fi and high-fi materials; a fifteen kg bronze and 1:200 Airfix style cardboard kit of the Titanic. The elements of my sculpture combine together very simply; the unsinkable Titanic is perched precariously at a jaunty angle on top of the bronze, defying the inevitable. The masks the performers wear create varied meanings and show alternating facial expressions at different angles as well. The severe angle that the Titanic is presented at suggests it may split in half at any moment; a reminder of its own fate. The Titanic’s precariousness instills a feeling of anxiety amongst the audience, which is precisely the effect that Noh seeks to achieve with its continual resonating sounds. Narratives are lost though as well, from a Western point of view with Noh as there are no subtitles, and likewise for an audience that doesn’t know the history of Titanic the meaning and narrative is lost, and the poignancy within the work. Slick is a snapshot of a moment, similar to the film Titanic where the moment of disaster is recreated in film.