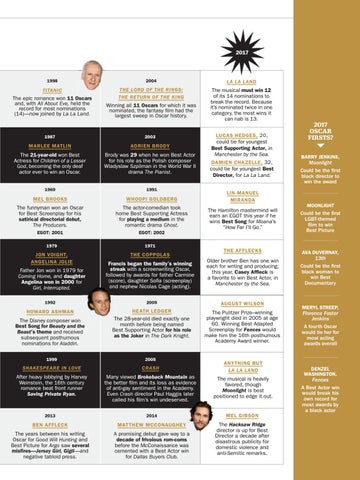 THE LORD OF THE RINGS: THE RETURN OF THE KING

The musical must win 12 of its 14 nominations to break the record. Because it’s nominated twice in one category, the most wins it can nab is 13.

The epic romance won 11 Oscars and, with All About Eve, held the record for most nominations (14)—now joined by La La Land.

Winning all 11 Oscars for which it was nominated, the fantasy film had the largest sweep in Oscar history.

The 21-year-old won Best Actress for Children of a Lesser God, becoming the only deaf actor ever to win an Oscar.

Brody was 29 when he won Best Actor for his role as the Polish composer Wladyslaw Szpilman in the World War II drama The Pianist.

The funnyman won an Oscar for Best Screenplay for his satirical directorial debut, The Producers.

The actor-comedian took home Best Supporting Actress for playing a medium in the romantic drama Ghost.

The Hamilton mastermind will earn an EGOT this year if he wins Best Song for Moana’s “How Far I’ll Go.”

Father Jon won in 1979 for Coming Home, and daughter Angelina won in 2000 for Girl, Interrupted.

Moonlight Could be the first black director to win the award

Could be the first LGBT-themed film to win Best Picture

Older brother Ben has one win each for writing and producing; this year, Casey Affleck is a favorite to win Best Actor, in Manchester by the Sea.

13th Could be the first black woman to win Best Documentary

The Disney composer won Best Song for Beauty and the Beast’s theme and received subsequent posthumous nominations for Aladdin.

TThe 28-year-old died exactly one month before being named Best Supporting Actor for his role as the Joker in The Dark Knight.

The Pulitzer Prize–winning playwright died in 2005 at age 60. Winning Best Adapted Screenplay for Fences would make him the 16th posthumous Academy Award winner.

ANYTHING BUT LA LA LAND

Many viewed Brokeback Mountain as the better film and its loss as evidence of anti-gay sentiment in the Academy. Even Crash director Paul Haggis later called his film’s win undeserved.

The musical is heavily favored, though Moonlight is best positioned to edge it out.

The years between his writing Oscar for Good Will Hunting and Best Picture for Argo saw several misfires—Jersey Girl, Gigli—and negative tabloid press.

A promising debut gave way to a decade of frivolous rom-coms before the McConaissance was cemented with a Best Actor win for Dallas Buyers Club.

The Hacksaw Ridge director is up for Best Director a decade after disastrous publicity for domestic violence and anti-Semitic remarks. 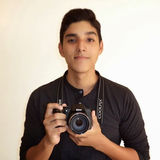