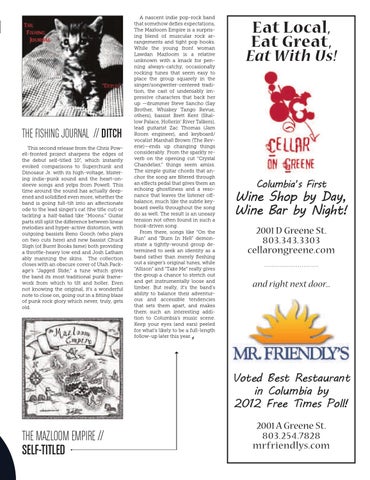 The Fishing JournaL // Ditch This second release from the Chris Powell-fronted project sharpens the edges of the debut self-titled 10”, which instantly evoked comparisons to Superchunk and Dinosaur Jr. with its high-voltage, blistering indie-punk sound and the heart-onsleeve songs and yelps from Powell. This time around the sound has actually deepened and solidified even more, whether the band is going full-tilt into an affectionate ode to the lead singer’s cat (the title cut) or tackling a half-ballad like “Moons.” Guitar parts still split the difference between linear melodies and hyper-active distortion, with outgoing bassists Reno Gooch (who plays on two cuts here) and new bassist Chuck Sligh (of Burnt Books fame) both providing a throttle-heavy low end and Josh Latham ably manning the skins. The collection closes with an obscure cover of Utah Package’s “Jagged Slide,” a tune which gives the band its most traditional punk framework from which to tilt and holler. Even not knowing the original, it’s a wonderful note to close on, going out in a fitting blaze of punk rock glory which never, truly, gets old.

A nascent indie pop-rock band that somehow defies expectations, The Mazloom Empire is a surprising blend of muscular rock arrangements and tight pop hooks. While the young front woman Lawdan Mazloom is a relative unknown with a knack for penning always-catchy, occasionally rocking tunes that seem easy to place the group squarely in the singer/songwriter-centered tradition, the cast of undeniably impressive characters that back her up —drummer Steve Sancho (Say Brother, Whiskey Tango Revue, others), bassist Brett Kent (Shallow Palace, Hollerin’ River Talkers), lead guitarist Zac Thomas (Jam Room engineer), and keyboard/ vocalist Marshall Brown (The Reverie)—ends up changing things considerably. From the sparkly reverb on the opening cut “Crystal Chandelier,” things seem amiss. The simple guitar chords that anchor the song are filtered through an effects pedal that gives them an echoing ghostliness and a resonance that leaves the listener offbalance, much like the subtle keyboard swells throughout the song do as well. The result is an uneasy tension not often found in such a hook-driven song. From there, songs like “On the Run” and “Burn In Hell” demonstrate a tightly-wound group determined to seek an identity as a band rather than merely fleshing out a singer’s original tunes, while “Allison” and “Take Me” really gives the group a chance to stretch out and get instrumentally loose and limber. But really, it’s the band’s ability to balance their adventurous and accessible tendencies that sets them apart, and makes them such an interesting addition to Columbia’s music scene. Keep your eyes (and ears) peeled for what’s likely to be a full-length follow-up later this year.