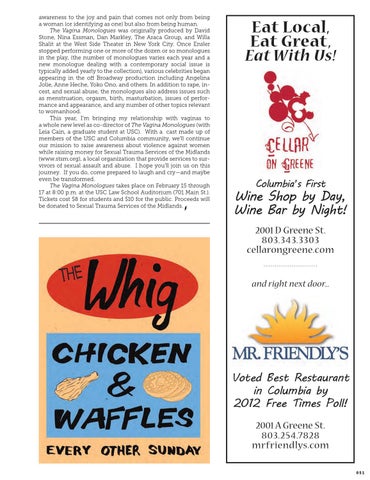 awareness to the joy and pain that comes not only from being a woman (or identifying as one) but also from being human. The Vagina Monologues was originally produced by David Stone, Nina Essman, Dan Markley, The Araca Group, and Willa Shalit at the West Side Theater in New York City. Once Ensler stopped performing one or more of the dozen or so monologues in the play, (the number of monologues varies each year and a new monologue dealing with a contemporary social issue is typically added yearly to the collection), various celebrities began appearing in the off Broadway production including Angelina Jolie, Anne Heche, Yoko Ono, and others. In addition to rape, incest, and sexual abuse, the monologues also address issues such as menstruation, orgasm, birth, masturbation, issues of performance and appearance, and any number of other topics relevant to womanhood. This year, I’m bringing my relationship with vaginas to a whole new level as co-director of The Vagina Monologues (with Leia Cain, a graduate student at USC). With a cast made up of members of the USC and Columbia community, we’ll continue our mission to raise awareness about violence against women while raising money for Sexual Trauma Services of the Midlands (www.stsm.org), a local organization that provide services to survivors of sexual assault and abuse. I hope you’ll join us on this journey. If you do, come prepared to laugh and cry—and maybe even be transformed. The Vagina Monologues takes place on February 15 through 17 at 8:00 p.m. at the USC Law School Auditorium (701 Main St.). Tickets cost $8 for students and $10 for the public. Proceeds will be donated to Sexual Trauma Services of the Midlands.