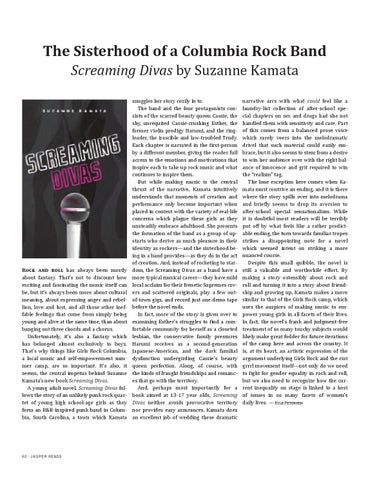 Rock and roll has always been mostly about fantasy. That’s not to discount how exciting and fascinating the music itself can be, but it’s always been more about cultural meaning, about expressing anger and rebellion, love and lust, and all those other ineffable feelings that come from simply being young and alive at the same time, than about banging out three chords and a chorus. Unfortunately, it’s also a fantasy which has belonged almost exclusively to boys. That’s why things like Girls Rock Columbia, a local music and self-empowerment summer camp, are so important. It’s also, it seems, the central impetus behind Suzanne Kamata’s new book Screaming Divas. A young adult novel, Screaming Divas follows the story of an unlikely punk rock quartet of young high school-age girls as they form an R&B-inspired punk band in Columbia, South Carolina, a town which Kamata

snuggles her story cozily in to. The band and the four protagonists consists of the scarred beauty queen Cassie, the shy, unrequited Cassie-crushing Esther, the former violin prodigy Harumi, and the ringleader, the irascible and law-troubled Trudy. Each chapter is narrated in the first-person by a different member, giving the reader full access to the emotions and motivations that inspire each to take up rock music and what continues to inspire them. But while making music is the central thrust of the narrative, Kamata intuitively understands that moments of creation and performance only become important when placed in context with the variety of real-life concerns which plague these girls as they unsteadily embrace adulthood. She presents the formation of the band as a group of upstarts who derive as much pleasure in their identity as rockers—and the sisterhood being in a band provides—as they do in the act of creation. And, instead of rocketing to stardom, the Screaming Divas as a band have a more typical musical career—they have mild local acclaim for their frenetic Supremes covers and scattered originals, play a few outof-town gigs, and record just one demo tape before the novel ends. In fact, more of the story is given over to examining Esther’s struggles to find a comfortable community for herself as a closeted lesbian, the conservative family pressures Harumi receives as a second-generation Japanese-American, and the dark familial dysfunction undergirding Cassie’s beauty queen perfection. Along, of course, with the kinds of fraught friendships and romances that go with the territory. And, perhaps most importantly for a book aimed at 13-17 year olds, Screaming Divas neither avoids provocative territory nor provides easy assurances. Kamata does an excellent job of wedding these dramatic

narrative arcs with what could feel like a laundry-list collection of after-school special chapters on sex and drugs had she not handled them with sensitivity and care. Part of this comes from a balanced prose voice which rarely veers into the melodramatic drivel that such material could easily embrace, but it also seems to stem from a desire to win her audience over with the right balance of innocence and grit required to win the “realism” tag. The lone exception here comes when Kamata must contrive an ending, and it is there where the story spills over into melodrama and briefly seems to drop its aversion to after-school special sensationalism. While it is doubtful most readers will be terribly put off by what feels like a rather predictable ending, the turn towards familiar tropes strikes a disappointing note for a novel which seemed intent on striking a more nuanced course. Despite this small quibble, the novel is still a valuable and worthwhile effort. By making a story ostensibly about rock and roll and turning it into a story about friendship and growing up, Kamata makes a move similar to that of the Girls Rock camp, which uses the auspices of making music to empower young girls in all facets of their lives. In fact, the novel’s frank and judgment-free treatment of so many touchy subjects would likely make great fodder for future iterations of the camp here and across the country. It is, at its heart, an artistic expression of the argument underlying Girls Rock and the riot grrrl movement itself—not only do we need to fight for gender equality in rock and roll, but we also need to recognize how the current inequality on stage is linked to a host of issues in so many facets of women’s daily lives. — Kyle Petersen