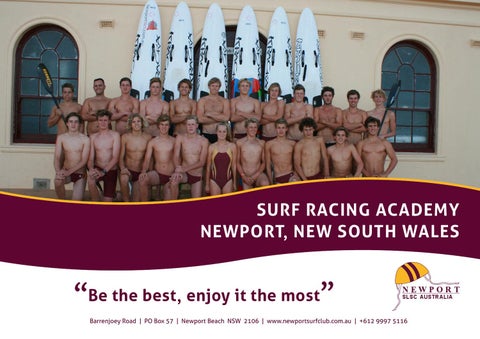 Be the best, enjoy it the most

Our intent is to…

We strive to be the best we can be in: »» Competition »» Sportsmanship »» Training »» Patrolling (community service) »» Conduct »» Life

Enjoy it the most Enjoy the: »» Training »» Challenge »» Competition »» Responsibility »» Results

»» Support the development of our squad members to grow into well balanced, respected people as well as great athletes that can achieve their goals at the sport’s highest level:

»» Build a platform for our competitors to achieve this from a Sydney based Surf Life Saving Club.

Mission Statement Be the best, enjoy it the most

Coaching/Mentoring from the best in the sport

Warm climate and warm water all year round

Funding from the club’s bistros, bars and poker machines

Impossible to match due to NSW licensing laws

If we provide the environment and we do the work, we will get the results.

Together we can create history in this sport

“I love seeing their courage and willingness to give themselves wholly to their challenge… they exude such clear confidence!”

This sport is not a ‘money’ sport. It has no lucrative career prospects. It is pursued by athletes who enjoy the prospects of knowing that the discipline, the ethic, the determination required will ultimately pay off in the people they become.

The training our athletes undertake is unsurpassed by any other amateur sport and arguably most professional sports. The commitment to perform at this level is gruelling, unrecognised and not comprehended by most. 13 sessions per week including: »» 5 x swim squads, 6-7 km per session »» 6 x water craft (board/surf ski/iron man), 2 hours per session »» 2 x run sprint sessions This commitment is even more impressive when recognising that a large percentage of our squad have external pressures of work, university and school (including the HSC).

Our athletes have little time available to hold part time jobs (however, some still manage to do so). Many of the families involved support more than one athlete.

The Newport Under 19 team dominated their division in the Coolangatta Gold:

A great performance also from Liam Yeates who completed this grueling event with only a ten week preparation.

Be the best, enjoy it the most