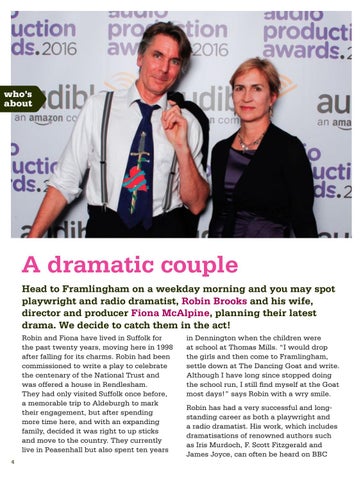 A dramatic couple Head to Framlingham on a weekday morning and you may spot playwright and radio dramatist, Robin Brooks and his wife, director and producer Fiona McAlpine, planning their latest drama. We decide to catch them in the act! Robin and Fiona have lived in Suffolk for the past twenty years, moving here in 1998 after falling for its charms. Robin had been commissioned to write a play to celebrate the centenary of the National Trust and was offered a house in Rendlesham. They had only visited Suffolk once before, a memorable trip to Aldeburgh to mark their engagement, but after spending more time here, and with an expanding family, decided it was right to up sticks and move to the country. They currently live in Peasenhall but also spent ten years 4

in Dennington when the children were at school at Thomas Mills. “I would drop the girls and then come to Framlingham, settle down at The Dancing Goat and write. Although I have long since stopped doing the school run, I still find myself at the Goat most days!” says Robin with a wry smile. Robin has had a very successful and longstanding career as both a playwright and a radio dramatist. His work, which includes dramatisations of renowned authors such as Iris Murdoch, F. Scott Fitzgerald and James Joyce, can often be heard on BBC