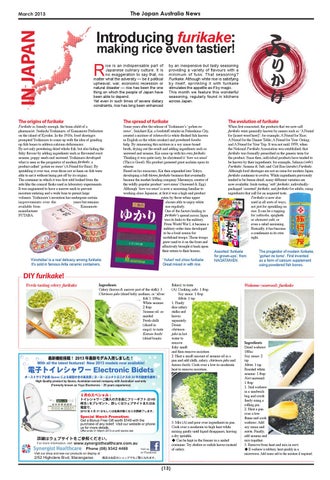 ice is an indispensable part of Japanese culinary culture. It is no exaggeration to say that, no matter what the adversity — be it political upheaval, war, economic recession or natural disaster — rice has been the one thing on which the people of Japan have been able to depend. Yet even in such times of severe dietary constraints, rice has long been enhanced

The origins of furikake

Furikake is, funnily enough, the brain-child of a pharmacist: Suekichi Yoshimaru, of Kumamoto Prefecture on the island of Kyushu. In the 1910s, food shortages prompted Yoshimaru to come up with the idea of grinding up fish bones to address calcium deficiencies. By not only powdering dried whole fish, but also hiding the fishy ﬂavour by adding ingredients such as ﬂavoured roast sesame, poppy seeds and seaweed, Yoshimaru developed what is seen as the progenitor of modern furikake, a product called ‘gohan no tomo’ (A Friend for Rice). By sprinkling it over rice, even those not so keen on fish were able to eat it without being put off by its origins. The container in which it was first sold looked from the side like the conical ﬂasks used in laboratory experiments. It was engineered to have a narrow neck to prevent moisture entering and a wide base to permit large volumes. Yoshimaru’s invention has undergone certain improvements over the years but remains available from Kumamoto manufacturer FUTABA.

by an inexpensive but tasty seasoning providing a variety of flavours with a minimum of fuss. That seasoning? Furikake. Although white rice is satisfying by itself, sprinkling it with furikake stimulates the appetite as if by magic. This month we feature this wonderful seasoning, regularly found in kitchens across Japan.

The spread of furikake

Some years after the release of Yoshimaru’s ‘gohan no tomo’, Seiichirō Kai, a foodstuff retailer in Fukushima City, created a mixture of ishimochi (a white-ﬂeshed fish known in English as the white croaker) and powdered kombu kelp. By simmering this mixture in a soy sauce-based broth, drying out the result and adding ingredients such as seaweed and sesame, Kai came up with his own furikake. Thinking it was quite tasty, he christened it ‘kore wa umai’ (This is Good). His product garnered great acclaim upon its release. Based on his successes, Kai then expanded into Tokyo, developing a full-blown furikake business that eventually became the market-leading company Marumiya, creator of the wildly popular product ‘nori-tama’ (Seaweed &amp; Egg). Although ‘kore wa umai’ is now a seasoning familiar to working-class Japanese, at first it was a high-end product eaten by those urban upper classes able to enjoy white rice regularly. One of the factors leading to furikake’s spread across Japan was its links to the military. From World War I, it became a military-order item developed to be a food source for mobilised troops. Those troops grew used to it on the front and effectively brought it back upon their return to their homes. ‘Yukari’ red shiso furikake. Great mixed in with rice.

The evolution of furikake

When first concocted, the products that we now call furikake were generally known by names such as ‘A Friend for [insert word here]’: for example, A Friend for Rice; A Friend for the Dinner Table; A Friend for Your Outing; and A Friend for Your Trip. It was not until 1959, when the National Furikake Association was established, that furikake was formally prescribed as the generic term for the product. Since then, individual products have tended to be known by their ingredients: for example, Salmon (sake) Furikake; Sesame &amp; Salt; and Cod Roe (tarako) Furikake. Although food shortages are not an issue for modern Japan, furikake continues to evolve. While ingredients previously tended to be freeze-dried, many different varieties are now available: fresh-tasting ‘soft’ furikake; individuallypackaged ‘assorted’ furikake; and furikake for adults, using ingredients that call for an acquired taste. Furikake is now also used in all sorts of ways, not just for sprinkling on rice. It can be a topping for yakisoba, spaghetti or okonomi-yaki, or even a salad seasoning. Basically, it has become a condiment in its own right. Assorted ‘furikake for grown-ups’, from NAGATANIEN.

The progenitor of modern furikake, ‘gohan no tomo’. First invented as a form of calcium supplement using powdered fish bones.

3. Mix (A) and pour over ingredients in pan. Cook over a moderate-to-high heat while mixing gently until liquid disappears, leaving a dry sprinkle. ◆ Can be kept in the freezer in a sealed container. Try daikon or radish leaves instead of celery. 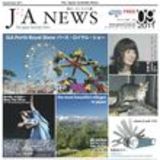