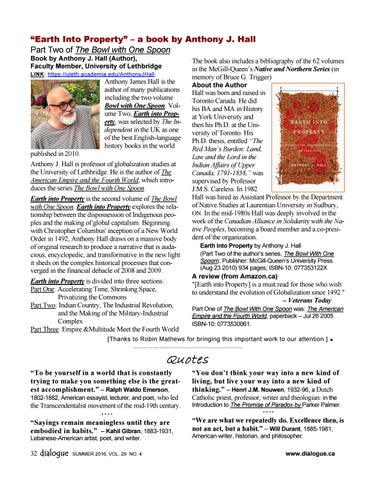 Anthony James Hall is the author of many publications including the two volume Bowl with One Spoon. Volume Two, Earth into Property, was selected by The Independent in the UK as one of the best English-language history books in the world published in 2010. Anthony J. Hall is professor of globalization studies at the University of Lethbridge. He is the author of The American Empire and the Fourth World, which introduces the series The Bowl with One Spoon. Earth into Property is the second volume of The Bowl with One Spoon. Earth into Property explores the relationship between the dispossession of Indigenous peoples and the making of global capitalism. Beginning with Christopher Columbus&#39; inception of a New World Order in 1492, Anthony Hall draws on a massive body of original research to produce a narrative that is audacious, encyclopedic, and transformative in the new light it sheds on the complex historical processes that converged in the financial debacle of 2008 and 2009. Earth into Property is divided into three sections: Part One: Accelerating Time, Shrinking Space, Privatizing the Commons Part Two: Indian Country, The Industrial Revolution, and the Making of the Military-Industrial Complex Part Three: Empire &amp;Multitude Meet the Fourth World

The book also includes a bibliography of the 62 volumes in the McGill-Queen’s Native and Northern Series (in memory of Bruce G. Trigger) About the Author Hall was born and raised in Toronto Canada. He did his BA and MA in History at York University and then his Ph.D. at the University of Toronto. His Ph.D. thesis, entitled “The Red Man’s Burden: Land, Law and the Lord in the Indian Affairs of Upper Canada, 1791-1858,” was supervised by Professor J.M.S. Careless. In 1982 Hall was hired as Assistant Professor by the Department of Native Studies at Laurentian University in Sudbury, ON. In the mid-1980s Hall was deeply involved in the work of the Canadian Alliance in Solidarity with the Native Peoples, becoming a board member and a co-president of the organization. Earth Into Property by Anthony J. Hall (Part Two of the author’s series, The Bowl With One Spoon); Publisher: McGill-Queen’s University Press (Aug 23 2010) 934 pages; ISBN-10: 077353122X

A review (from Amazon.ca) &quot;[Earth into Property] is a must read for those who wish to understand the evolution of Globalization since 1492.&quot; – Veterans Today Part One of The Bowl With One Spoon was: The American Empire and the Fourth World, paperback – Jul 26 2005 ISBN-10: 0773530061.

[Thanks to Robin Mathews for bringing this important work to our attention.]

“To be yourself in a world that is constantly trying to make you something else is the greatest accomplishment.” – Ralph Waldo Emerson, 1802-1882, American essayist, lecturer, and poet, who led the Transcendentalist movement of the mid-19th century. ****

“Sayings remain meaningless until they are embodied in habits.” – Kahil Gibran, 1883-1931, Lebanese-American artist, poet, and writer.

“We are what we repeatedly do. Excellence then, is not an act, but a habit.” – Will Durant, 1885-1981, American writer, historian, and philosopher. www.dialogue.ca