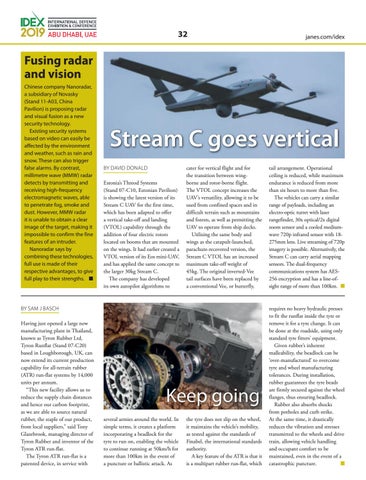 Fusing radar and vision Chinese company Nanoradar, a subsidiary of Novasky (Stand 11-A03, China Pavilion) is proposing radar and visual fusion as a new security technology. Existing security systems based on video can easily be affected by the environment and weather, such as rain and snow. These can also trigger false alarms. By contrast, millimetre wave (MMW) radar detects by transmitting and receiving high-frequency electromagnetic waves, able to penetrate fog, smoke and dust. However, MMW radar it is unable to obtain a clear image of the target, making it impossible to confirm the fine features of an intruder. Nanoradar says by combining these technologies, full use is made of their respective advantages, to give full play to their strengths. ■

Stream C goes vertical BY DAVID DONALD Estonia’s Threod Systems (Stand 07-C10, Estonian Pavilion) is showing the latest version of its Stream C UAV for the first time, which has been adapted to offer a vertical take-off and landing (VTOL) capability through the addition of four electric rotors located on booms that are mounted on the wings. It had earlier created a VTOL version of its Eos mini-UAV, and has applied the same concept to the larger 30kg Stream C. The company has developed its own autopilot algorithms to

cater for vertical flight and for the transition between wingborne and rotor-borne flight. The VTOL concept increases the UAV’s versatility, allowing it to be used from confined spaces and in difficult terrain such as mountains and forests, as well as permitting the UAV to operate from ship decks. Utilising the same body and wings as the catapult-launched, parachute-recovered version, the Stream C VTOL has an increased maximum take-off weight of 45kg. The original inverted-Vee tail surfaces have been replaced by a conventional Vee, or butterfly,

BY SAM J BASCH Having just opened a large new manufacturing plant in Thailand, known as Tyron Rubber Ltd, Tyron Runflat (Stand 07-C20) based in Loughborough, UK, can now extend its current production capability for all-terrain rubber (ATR) run-flat systems by 14,000 units per annum. “This new facility allows us to reduce the supply chain distances and hence our carbon footprint, as we are able to source natural rubber, the staple of our product, from local suppliers,” said Tony Glazebrook, managing director of Tyron Rubber and inventor of the Tyron ATR run-flat. The Tyron ATR run-flat is a patented device, in service with

Keep going several armies around the world. In simple terms, it creates a platform incorporating a beadlock for the tyre to run on, enabling the vehicle to continue running at 50km/h for more than 100km in the event of a puncture or ballistic attack. As

the tyre does not slip on the wheel, it maintains the vehicle’s mobility, as tested against the standards of Finabel, the international standards authority. A key feature of the ATR is that it is a multipart rubber run-flat, which

tail arrangement. Operational ceiling is reduced, while maximum endurance is reduced from more than six hours to more than five. The vehicles can carry a similar range of payloads, including an electro-optic turret with laser rangefinder, 30x optical/2x digital zoom sensor and a cooled mediumwave 720p infrared sensor with 18275mm lens. Live streaming of 720p imagery is possible. Alternatively, the Stream C can carry aerial mapping sensors. The dual-frequency communications system has AES256 encryption and has a line-ofsight range of more than 100km. ■

requires no heavy hydraulic presses to fit the runflat inside the tyre or remove it for a tyre change. It can be done at the roadside, using only standard tyre fitters’ equipment. Given rubber’s inherent malleability, the beadlock can be ‘over-manufactured’ to overcome tyre and wheel manufacturing tolerances. During installation, rubber guarantees the tyre beads are firmly secured against the wheel flanges, thus ensuring beadlock. Rubber also absorbs shocks from potholes and curb strike. At the same time, it drastically reduces the vibration and stresses transmitted to the wheels and drive train, allowing vehicle handling and occupant comfort to be maintained, even in the event of a catastrophic puncture. ■ 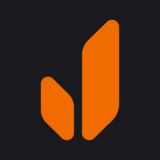