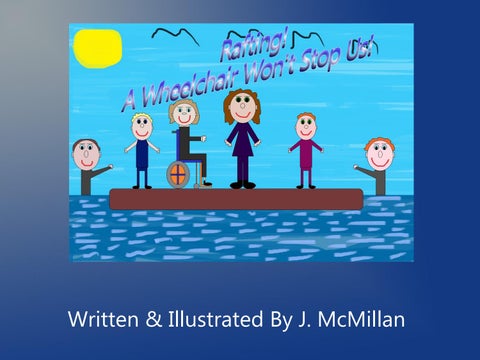 One afternoon a group of 6 high school friends called Adam, Lee, Michelle, Sarah, Isabelle and Trent were at Trent&#39;s place outside kicking the football to each other. It is easier for everyone to hang out at Trent&#39;s house. He was born with a disability called Cerebral Palsy. Trent is in a wheelchair because he can&#39;t walk without a person holding him up and walking behind him. Trent&#39;s house was set up with ramps and a toilet that was wheelchair friendly.

Lee said to the group of friends come on, let&#39;s do something that is interesting and fun instead of sitting around here next weekend. Is there anyone who has got a suggestion about what we could do? Isabelle pipes up and said what about going white water rafting down the Picton River near Huonville? Everyone got excited about Isabelle&#39;s idea and they said let&#39;s do it except for Trent. Trent had a sad look on his face because he thought that he wouldn&#39;t be able to go with his friends rafting because he was in a wheelchair. Adam saw that Trent was upset and he said to Trent that we are going to take you on our adventure if we can arrange it with the rafting people.

Adam was excited to break the good news to Trent and ask his Dad permission to take Trent rafting. Adam and Sarah&#39;s parents were going on the rafting adventure to make up the numbers in the rafts. The parents will be able to supervise the teenagers on their adventure in case something goes wrong. Trent&#39;s Dad said yes, it will be a wonderful experience for Trent to go rafting. Trent was very excited about going. Adam told the rest of the group through a group Facebook message and he told his parents that Trent will be coming as well. Everyone was thrilled and the other friends messaged Adam to tell him that they would help him with Trent on the day.

The group&#39;s adventure was about to start after meeting up with the other cars of people and driving an hour to get to the Picton River. Everyone was excited to see each other and got out of the cars. Adam and Lee got Trent&#39;s wheelchair down off the roof of the car. It took a while for them to work out how to set the wheelchair up for Trent with Trent telling them how to do it. Michelle came over and said I know how to do it because I am a girl. She went ahead and set up the wheelchair for the boys. Michelle helped to get Trent out of the car into his wheelchair.

Everyone met the rafting people. They had to go up to the hut on the hill to get prepared for their rafting adventure. Everyone started to walk up the hill, when Trent yells out what about me. Trent said can someone give me a push up the hill please. Adam and Lee got on one side of Trent&#39;s wheelchair and started pushing Trent up the hill. They got halfway up and then Sarah along with Michelle got at the front of Trent&#39;s wheelchair to give the boys a hand the rest of the way up to the hut. It was time for everyone to get changed into their wet suits. Lee had bought his old wet suit and boots for Trent to wear. After Lee and Adam got changed into their wet suits. They started changing Trent. They decided to pick up Trent and shake him into Lee&#39;s old wet suit. Everyone started laughing at the boys, but they got the wet suit on Trent finally. Michelle raced over and zipped the wet suit up on Trent for the boys. Lee and Adam put Trent back in his wheelchair. Isabelle and Sarah were snapping heaps of photos of the boys shaking Trent into the wet suit to post on Facebook.

The rafting people told Trent that he will be sitting down on the floor of the raft because it is safer. Trent wouldn&#39;t be able to fall off the side of the raft then. It was time to travel up to the river&#39;s starting point to begin their rafting trip. The rafting people told Trent that his wheelchair would have to stay at the hut or in the car. They put Trent&#39;s wheelchair in the car. Lee helped Trent to get onto Adam&#39;s back. Adam piggybacked Trent to the van to go up the river to get into the raft. Adam started running around like a mad thing with Trent on his back on the way to the van. Trent was laughing and screaming in excitement. There were more photos snapped of Adam being silly with Trent for Facebook.

Michelle and Isabelle started to get nervous in the van, but they came right a few minutes later. Everyone was getting excited. When the van stopped at the water edge, everyone got out of the van and headed down to the rafts. The rafting people helped Adam with Trent to get him down to the rafts by carrying Trent over the rocks and setting him up on the floor of the raft. A rafting guy put a helmet on Trent to protect his head.

Everyone else got into the rafts. They were off paddling down to the first big drop in the river. The rafting people yelled out hold on, here we go! The raft took off very fast down the dip. The water went flying and everyone got wet. Trent got absolutely soaked with the water spraying all over him because he was sitting in the front of the raft. Trent screamed because of the shock of the cold water on him. Adam said to Trent you will be right, it is only a bit of cold water, be tough! Adam fell off the raft in the water when they went down the next big dip in the river. Trent cracked up with laughter and said sucked in. After Adam got back into the raft, he gave Trent a hug and make him more wet for his comment. Everyone else laughed and took photos of what Adam did to Trent to put on Facebook.

Their rafting adventure lasted for about 3 hours and everyone had an amazing time. Trent enjoyed his ride in the raft and he had a huge smile on his face. It was time to get out of the raft and have lunch. Lee gave Adam an evil grin. Both of them picked up Trent and threw him in the water. They killed themselves laughing. Adam and Lee jumped into the river to rescue Trent from drowning. All of the girls jumped into the river after the boys. Adam&#39;s parents took some photos of the boys throwing Trent into the water.

Adam floated with Trent to the edge of the river. Lee helped Adam to pick up Trent out of the river and sat him on the grass while they got his wheelchair out of the car. Michelle stayed with Trent to hold him up in the sitting position because Trent can&#39;t sit up on his own. Trent and Michelle were keen on each other. They were chatting to one another. They decided to have a bit of a kiss being teenagers, when no one was looking but Adam caught them out. Adam smiled and said nothing. Adam got Trent into his wheelchair. Michelle helped Adam to push Trent up to the hut to get warm and have lunch. Adam and Trent were buggered by the time they got home, but they had an awesome experience of friendship.

About The Author My name is Janelle McMillan. I am an artist in Hobart who has used my computer to create a number of bright, colourful, fun and unique artworks over the years. I have a physical disability called Cerebral Palsy which causes my body movements to be uncontrolled. I am in a wheelchair and I am also non verbal. Technology has allowed me to operate a computer system that is tailored to my needs. I have created this book called Rafting, A Wheelchair Won&#39;t Stop Us for children from 10 up to young teenagers. The book is a fun story about friendship with a school kid that is in a wheelchair and the challenges that the able bodied friends face trying to include him in a rafting trip. All of the able bodied friends worked together to help their friend with a disability to experience going rafting for the day.

This book is called Rafting, A Wheelchair Won&#39;t Stop Us for children from 10 up to young teenagers. The book is a fun story about friendship with a school kid that is in a wheelchair and the challenges that the able bodied friends face trying to include him in a rafting trip. All of the able bodied friends worked together to help their friend with a disability to experience going rafting for the day.

Rafting! A Wheelchair Won't Stop Us!

This book is called Rafting, A Wheelchair Won't Stop Us for children from 10 up to young teenagers. The book is a fun story about friendship with a school kid that is in a wheelchair and the challenges that the able bodied friends face trying to include him in a rafting trip. All of the able bodied friends worked together to help their friends with disability to experience going rafting for the day. 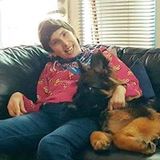