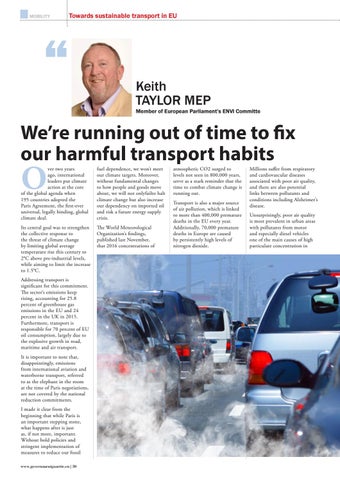 Towards sustainable transport in EU

fuel dependence, we won’t meet our climate targets. Moreover, without fundamental changes to how people and goods move about, we will not onlyfailto halt climate change but also increase our dependency on imported oil and risk a future energy supply crisis.

Its central goal was to strengthen the collective response to the threat of climate change by limiting global average temperature rise this century to 2°C above pre-industrial levels, while aiming to limit the increase to 1.5°C.

Addressing transport is significant for this commitment. The sector’s emissions keep rising, accounting for 25.8 percent of greenhouse gas emissions in the EU and 24 percent in the UK in 2015. Furthermore, transport is responsible for 70 percent of EU oil consumption, largely due to the explosive growth in road, maritime and air transport. It is important to note that, disappointingly, emissions from international aviation and waterborne transport, referred to as the elephant in the room at the time of Paris negotiations, are not covered by the national reduction commitments. I made it clear from the beginning that while Paris is an important stepping stone, what happens after is just as, if not more, important. Without bold policies and stringent implementation of measures to reduce our fossil www.governmentgazette.eu | 38

atmospheric CO2 surged to levels not seen in 800,000 years, serve as a stark reminder that the time to combat climate change is running out. Transport is also a major source of air pollution, which is linked to more than 400,000 premature deaths in the EU every year. Additionally, 70,000 premature deaths in Europe are caused by persistently high levels of nitrogen dioxide.

Millions suffer from respiratory and cardiovascular diseases associated with poor air quality, and there are also potential links between pollutants and conditions including Alzheimer’s disease. Unsurprisingly, poor air quality is most prevalent in urban areas with pollutants from motor and especially diesel vehicles one of the main causes of high particulate concentration in 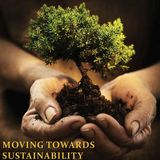