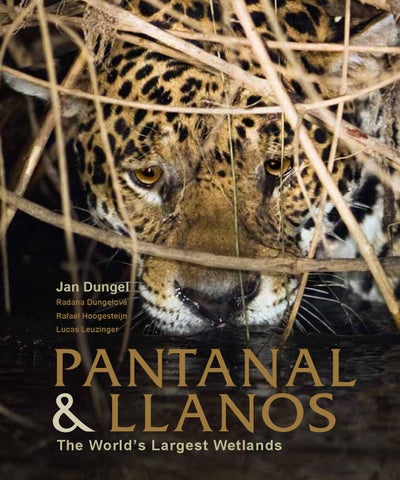 209 Shadows of the night

221 Kingfishers and their allies

Introduction The wetlands of the Pantanal in Brazil and of the Llanos in Venezuela are the largest on Earth bar none. These swamps and lakes are surrounded by the periodically flooded savannahs, and the entire area is interwoven with a dense tangle of rivers. Also featured here is a region overgrown with a deciduous tropical forest. It is a strange and remarkable land from many points of view. Traditionally, both the Pantanal and the Llanos are places with extensive cattle raising, and thus directly influenced by people. Nevertheless, owing mainly to their remoteness and unique ecology (alternating dry and wet seasons), there are still plenty of places that provide a home to the greatest number of wild animals in the continentâ&amp;#x20AC;&amp;#x2122;s interiors. Although two and half thousand kilometers separate the Pantanal from the Llanos, both places are very similar. They lie on the northern (Llanos) and southern (Pantanal) edge of the Amazon Basin and the influence of Amazonia is in many regards clearly evident here, especially concerning the local fauna. The natural conditions are similar in both areas and are, to a considerable extent, dictated by the regular alternating of devastating dry and wet seasons, when many farms are for months isolated from the surrounding world. The extensive wetlands, brimming with life and home to hundreds of thousands of caimans or pink dolphins, transform after a few months into a forlorn burial ground void of life. Lying about in the dust are the skeletons of dead fish, capybaras and cattle. Yet this impression is superficial and not altogether true. For many inhabitants the dry season is instead a time of great abundance. Hundreds and thousands of wading birds gather around the drying lagoons and feast on the millions of trapped fish in the shallow mud. All the caimans have to do to satisfy their hunger is to open and close their mouths. It is also a time when I come across migrating anacondas in the Llanos... An experienced observer will discover aÂ number of differences between the Pantanal and the Llanos and even though the fauna of the two areas is relatively homogeneous, there are many species that exist in the Pantanal that you cannot find in the Llanos and vice-versa. 6 4

Pantanal and Los Llanos The Pantanal and the Llanos also have striking similarities in their geological histories. They are both enormous alluvial basins created by a massive layer of river-born sediments with a dense network of rivers, swamps and rivers that flood the surrounding savannah during the rainy season. Part of the region is overgrown by the remnants of tropical deciduous forests with gallery forests also bordering the river banks. The Pantanal covers a significant part of the regions of the Mato Grosso and Mato Grosso do Sul states in western Brazil, from where it extends all the way to Bolivia and Paraguay with its total area exceeding 200,000 km2. And while the hydrological backbone of the Pantanal is the Paraguay River, the main river that drains the Llanos of Venezuela can be considered the Orinoco and its sinistral tributary, the Apure. The Llanos occupies a considerable part of the interiors of Venezuela and Colombia, and its entire area also exceeds 200,000 km2. However, the entire region cannot be considered a typical wetland â&amp;#x20AC;&amp;#x201C; these are mainly located in the central and western part of the Llanos and so in terms of geographical records, the Pantanal clearly leads in the contest for the largest wetland on Earth.

Mosaic of freshwater and saltwater lagoons

Cowboys The Llanos and the Pantanal are among the traditional cattle raising areas with aÂ high production of quality beef. The rugged lifestyle is also shown in the unique culture of the cowboys, their customs, music, dances, dresses, cockfighting, architecture and unusual legends passed down through the generations. Some people insist that the very heart of Venezuela beats in the Llanos and the typical joropo music can still be heard throughout the country. Life in the savannah was never easy, and during the wet season some farms are still completely isolated from the surrounding world. The hard work and harsh life conditions were etched into the faces of the Pantaneiros and Llaneros, but this has never stripped them of their sense of humour or of their particular enchantment and penetrating look. But even here the situation is rapidly changing and the cowboy life is quickly being replaced by modern cattle-raising methods and intensive agro-culture. Cattle raising also has a major impact on the face of the land; the savannahs have been transformed into cattle pastures and large areas of the original forests have been burnt and cut down. Conflicts between the farmers and wildlife are a daily reality, and the animals are hunted to augment the farmersâ&amp;#x20AC;&amp;#x2122; otherwise modest diet. Poaching and illegal fishing are a general problem in many places, and extremely difficult times have fallen on large predators such as jaguars and pumas. Illegal hunting and the fragmentation of their natural environment has forced these animals to become predators of the cattle, and many farmers have therefore waged a merciless war against them. Yet despite massive pressure, aÂ large part of the land has maintained its wilderness and remains a real paradise of wildlife. Conservationist projects are being implemented in the Pantanal with increasing frequency, and so the hope for protecting at least part of this exceptional place on Earth is also gaining momentum. 23 15

Sunset on the farm

Cattle stranded on the last piece of dry land

Pantanal Big Five As with the renowned Big Five in African savannahs, a few typical representatives can be found among animals in the Pantanal as well. From my European perspective this may consist of jaguar, tapir, anteater, marsh deer and rhea.

The largest predator of the South American continent and the unspoken ruler of the Pantanal and the Llanos. The New York Foundation PANTHERA has therefore come up with a mega-project to link threatened but vital jaguar populations by natural corridors (The Jaguar Corridor Initiative / www.panthera.org). What was initially a purely idealistic obsession of several experienced conservationists and zoologists led by Alan Rabinowitz recently proved to be a very successful project gaining increasing respect and admiration. The research of PANTHERA zoologist Rafael Hoogesteijn had yielded a wide range of knowledge crucial for the protection of jaguars. It has become clear, for example, that on farms where the hunting of wild animals is regulated or totally banned and some land is left fallow, livestock predation by jaguars is limited and jaguars focus more on their natural food. The economic benefit of such measures can be expressed in higher profit, not to mention the conservation of at least some parts of natural ecosystems. It has therefore become apparent that the jaguar-farmer conflict is often unnecessary and motivated by prejudice and ignorance. There are many possible measures for jaguar protection suggested by Rafael, though education, public awareness, and support for farmers by the NGOs and state institutions are perhaps the most important ones.

Frequently spotted in the Pantanal in particular, we’ll often easily see several tapirs during a morning canoe trip or evening excursion in an all-terrain vehicle. The tapir is a perissodactylous animal and is the largest South American mammal. 36 24

Jaguar jumping for its prey

The South American tropical wetlands are home to countless birds. We meet here with them literally every step of the way. The number of species varies in professional publications, but it seems that between 600 and 700 species live in the Pantanal as well as the Llanos. At Hato Corralito, one of the smaller farms by the Pao River in Llanos, I myself have identified over 200 species, but I have to confess to not being able to identify a number of small songbirds. Ciconiiformes (wading birds) are typical wetland inhabitants. Yet there are many species of another genus represented here as well â&amp;#x20AC;&amp;#x201C; such as ducks, birds of prey, chachalacas, guans and curassows, woodpeckers and toucans and even the most plentiful: passerines

These representatives of the bird kingdom are generally called wading birds. They are the most common species in the Pantanal and in the Llanos. During the dry season in particular they gather in massive flocks around the very low rivers and lakes where they hunt both small and larger fish and other aquatic creatures in the shallow muddy water.

These belong to the family of darters. They are large birds with a wingspan up to 130 cm and a characteristic snakelike appearance. Their small head, long neck and dartlike beak are a perfect weapon for fishing. These excellent divers are very common both in Llanos and Pantanal.

Flocks of red coloured ibises are among theÂ most striking creatures that can be found in the Llanos. The colours are especially overwhelming at evening: along with the white herons they descend into the treetops to pass the night and the deep purple of their feathers contrasts with the heronsâ&amp;#x20AC;&amp;#x2122; whiteness. Although they appear on the shores of Brazil and other places, these birds are typically found in Venezuela, though not in the Pantanal.

The largest parrot and also one of the most striking symbols of the Pantanal, this bird is a loyal companion to people on farms where it stands out with its flamboyant colouring and loud and conspicuous behaviour. Being in the company of people seems to suit it, and it nests almost exclusively in the hollows of manduvi trees (Sterculia apetala), whose extensive crowns shade the cowboysâ&amp;#x20AC;&amp;#x2122; buildings as well as the cattle corrals.

Living in the Pantanal are 80 species of reptiles and some 30 species of amphibians, while in the Llanos these figures are 75 and 36, respectively. The most striking representatives of this group are unquestionably the Spectacled Caimans (Caiman crocodilus), which you seem to come across at every puddle. The population of caimans of the Caiman crocodilus yacare sub-species is estimated at 10 million and is therefore the most populous crocodile of them all. Their bigger relative, the Orinoco crocodile (Crocodylus intermedius), may grow up to 5 m. Crocodiles live only in Llanos but are critically endangered. Also of high abundance in the Llanos are the Iguana (Iguana iguana) and the Llanos Sideneck turtle (Podocnemis vogli), which do not appear in the Pantanal. The anaconda (Eunectes murinus) is a reptile of great numbers in the Llanos, while in the Pantanal it is represented by the smaller Yellow Anaconda (Eunectes notaeus).