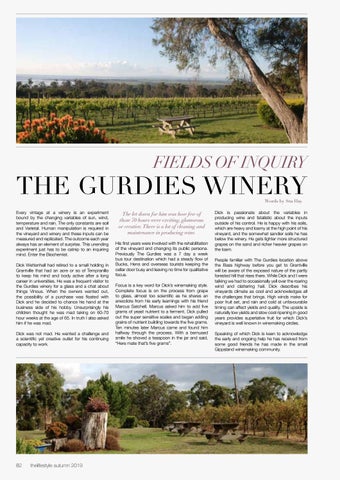 Every vintage at a winery is an experiment bound by the changing variables of sun, wind, temperature and rain. The only constants are soil and Varietal. Human manipulation is required in the vineyard and winery and these inputs can be measured and replicated. The outcome each year always has an element of surprise. This unending experiment just has to be catnip to an inquiring mind. Enter the Biochemist. Dick Wettenhall had retired to a small holding in Grantville that had an acre or so of Tempranillo to keep his mind and body active after a long career in universities. He was a frequent visitor to the Gurdies winery for a glass and a chat about things Vinous. When the owners wanted out, the possibility of a purchase was floated with Dick and he decided to chance his hand at the business side of his hobby. Unsurprisingly his children thought he was mad taking on 60-70 hour weeks at the age of 65. In truth I also asked him if he was mad. Dick was not mad. He wanted a challenge and a scientific yet creative outlet for his continuing capacity to work.

The let down for him was how few of those 70 hours were exciting, glamorous or creative. There is a lot of cleaning and maintenance in producing wine. His first years were involved with the rehabilitation of the vineyard and changing its public persona. Previously The Gurdies was a 7 day a week bus tour destination which had a steady flow of Bucks, Hens and overseas tourists keeping the cellar door busy and leaving no time for qualitative focus. Focus is a key word for Dick’s winemaking style. Complete focus is on the process from grape to glass, almost too scientific as he shares an anecdote from his early learnings with his friend Marcus Satchell. Marcus asked him to add five grams of yeast nutrient to a ferment. Dick pulled out the super sensitive scales and began adding grains of nutrient building towards the five grams. Ten minutes later Marcus came and found him halfway through the process. With a bemused smile he shoved a teaspoon in the jar and said, “Here mate that’s five grams”.

Dick is passionate about the variables in producing wine and fatalistic about the inputs outside of his control. He is happy with his soils, which are heavy and loamy at the high point of his vineyard, and the somewhat sandier soils he has below the winery. He gets lighter more structured grapes on the sand and richer heavier grapes on the loam. People familiar with The Gurdies location above the Bass highway before you get to Grantville will be aware of the exposed nature of the partly forested hill that rises there. While Dick and I were talking we had to occasionally yell over the roaring wind and clattering hail. Dick describes his vineyards climate as cool and acknowledges all the challenges that brings. High winds make for poor fruit set, and rain and cold at unfavourable timing can affect yields and quality. The upside is naturally low yields and slow cool ripening in good years provides superlative fruit for which Dick’s vineyard is well known in winemaking circles. Speaking of which Dick is keen to acknowledge the early and ongoing help he has received from some good friends he has made in the small Gippsland winemaking community. 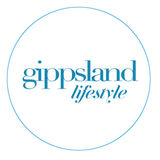