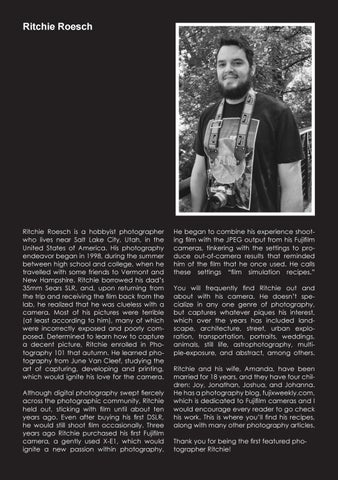 Ritchie Roesch is a hobbyist photographer who lives near Salt Lake City, Utah, in the United States of America. His photography endeavor began in 1998, during the summer between high school and college, when he travelled with some friends to Vermont and New Hampshire. Ritchie borrowed his dad’s 35mm Sears SLR, and, upon returning from the trip and receiving the film back from the lab, he realized that he was clueless with a camera. Most of his pictures were terrible (at least according to him), many of which were incorrectly exposed and poorly composed. Determined to learn how to capture a decent picture, Ritchie enrolled in Photography 101 that autumn. He learned photography from June Van Cleef, studying the art of capturing, developing and printing, which would ignite his love for the camera. Although digital photography swept fiercely across the photographic community, Ritchie held out, sticking with film until about ten years ago. Even after buying his first DSLR, he would still shoot film occasionally. Three years ago Ritchie purchased his first Fujifilm camera, a gently used X-E1, which would ignite a new passion within photography.

He began to combine his experience shooting film with the JPEG output from his Fujifilm cameras, tinkering with the settings to produce out-of-camera results that reminded him of the film that he once used. He calls these settings “film simulation recipes.” You will frequently find Ritchie out and about with his camera. He doesn’t specialize in any one genre of photography, but captures whatever piques his interest, which over the years has included landscape, architecture, street, urban exploration, transportation, portraits, weddings, animals, still life, astrophotography, multiple-exposure, and abstract, among others. Ritchie and his wife, Amanda, have been married for 18 years, and they have four children: Joy, Jonathan, Joshua, and Johanna. He has a photography blog, fujixweekly.com, which is dedicated to Fujifilm cameras and I would encourage every reader to go check his work. This is where you’ll find his recipes, along with many other photography articles. Thank you for being the first featured photographer Ritchie!