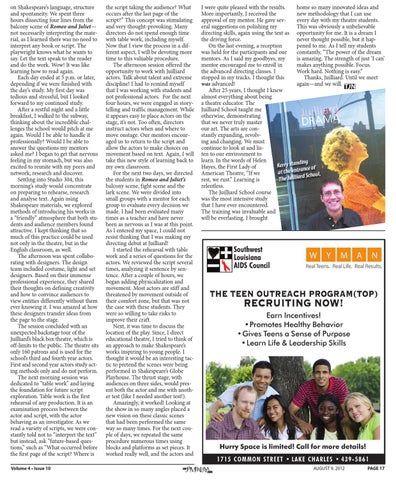 on Shakespeare’s language, structure and spontaneity. We spent three hours dissecting four lines from the balcony scene of Romeo and Juliet— not necessarily interpreting the material, as I learned there was no need to interpret any book or script. The playwright knows what he wants to say. Let the text speak to the reader and do the work. Wow! It was like learning how to read again. Each day ended at 5 p.m. or later, depending if we were finished with the day’s study. My first day was tedious and stressful, but I looked forward to my continued study. After a restful night and a little breakfast, I walked to the subway, thinking about the incredible challenges the school would pitch at me again. Would I be able to handle it professionally? Would I be able to answer the questions my mentors asked me? I began to get that nervous feeling in my stomach, but was also excited to reunite with my peers and network, research and discover. Settling into Studio 304, this morning’s study would concentrate on preparing to rehearse, research and analyse text. Again using Shakespeare materials, we explored methods of introducing his works in a “friendly” atmosphere that both students and audience members found attractive. I kept thinking that so much of this practice could be used not only in the theatre, but in the English classroom, as well. The afternoon was spent collaborating with designers. The design team included costume, light and set designers. Based on their immense professional experience, they shared their thoughts on defining creativity and how to convince audiences to view entities differently without them ever knowing it. I was amazed at how these designers transfer ideas from the page to the stage. The session concluded with an unexpected backstage tour of the Juilliard’s black box theatre, which is off-limits to the public. The theatre sits only 160 patrons and is used for the school’s third and fourth year actors. First and second year actors study acting methods only and do not perform. The next morning session was dedicated to “table work” and laying the foundation for future script exploration. Table work is the first rehearsal of any production. It is an examination process between the actor and script, with the actor behaving as an investigator. As we read a variety of scripts, we were constantly told not to “interpret the text” but instead, ask “future-based questions,” such as “What occurred before the first page of the script? Where is Volume 4 • Issue 10

the script taking the audience? What occurs after the last page of the script?” This concept was stimulating and very thought-provoking. Many directors do not spend enough time with table work, including myself. Now that I view the process in a different aspect, I will be devoting more time to this valuable procedure. The afternoon session offered the opportunity to work with Juilliard actors. Talk about talent and extreme discipline! I had to remind myself that I was working with students and not professional actors. For the next four hours, we were engaged in storytelling and traffic management. While it appears easy to place actors on the stage, it’s not. Too often, directors instruct actors when and where to move onstage. Our mentors encouraged us to return to the script and allow the actors to make choices on movement based on text. Again, I will take this new style of learning back to my own classroom. For the next two days, we directed the students in Romeo and Juliet’s balcony scene, fight scene and the lark scene. We were divided into small groups with a mentor for each group to evaluate every decision we made. I had been evaluated many times as a teacher and have never been as nervous as I was at this point. As I entered my space, I could not resist thinking that I was making my directing debut at Juilliard! I started the rehearsal with table work and a series of questions for the actors. We reviewed the script several times, analyzing it sentence by sentence. After a couple of hours, we began adding physicalization and movement. Most actors are stiff and threatened by movement outside of their comfort zone, but that was not the case with these students. They were so willing to take risks to improve their craft. Next, it was time to discuss the location of the play. Since, I direct educational theatre, I tried to think of an approach to make Shakespeare’s works inspiring to young people. I thought it would be an interesting tactic to pretend the scenes were being performed in Shakespeare’s Globe Playhouse. The thrust stage, with audiences on three sides, would present both the actor and me with another test (like I needed another test!). Amazingly, it worked! Looking at the show in so many angles placed a new vision on these classic scenes that had been performed the same way so many times. For the next couple of days, we repeated the same procedure numerous times using blocks and platforms as set pieces. It worked really well, and the actors and

I were quite pleased with the results. home so many innovated ideas and More importantly, I received the new methodology that I can use approval of my mentor. He gave sevevery day with my theatre students. eral suggestions on polishing my This was obviously a unbelievable directing skills, again using the text as opportunity for me. It is a dream I the driving force. never thought possible, but it hapOn the last evening, a reception pened to me. As I tell my students was held for the participants and our constantly, “The power of the dream mentors. As I said my goodbyes, my is amazing. The strength of just ‘I can’ mentor encouraged me to enroll in makes anything possible. Focus. the advanced directing classes. I Work hard. Nothing is easy.” stopped in my tracks. I thought this Thanks, Juilliard. Until we meet was advanced! again—and we will. TJN After 25 years, I thought I knew almost everything about being a theatre educator. The Juilliard School taught me otherwise, demonstrating that we never truly master our art. The arts are constantly expanding, revolving and changing. We must continue to look at and listen to our environment to learn. In the words of Helen ing Kerry stand ce of Hayes, the First Lady of n a at the entr chool. American Theatre, “If we S rd The Juillia rest, we rust.” Learning is relentless. The Juilliard School course was the most intensive study that I have ever encountered. The training was invaluable and will be everlasting. I brought

August 9, 2012 Living and Laughing Your Way to a Healthier Ever After 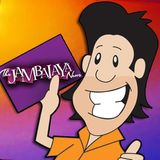