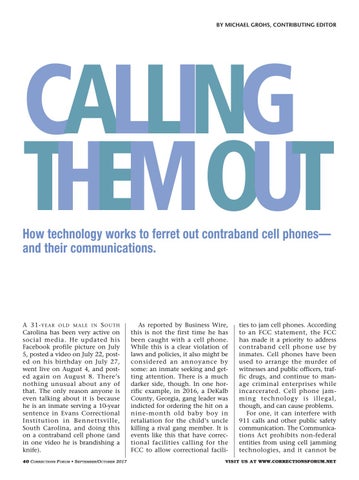 How technology works to ferret out contraband cell phones— and their communications.

A 31- Y E A R O L D M A L E I N S O U T H Carolina has been very active on social media. He updated his Facebook profile picture on July 5, posted a video on July 22, posted on his birthday on July 27, went live on August 4, and posted again on August 8. There’s nothing unusual about any of that. The only reason anyone is even talking about it is because he is an inmate serving a 10-year sentence in Evans Correctional Institution in Bennettsville, South Carolina, and doing this on a contraband cell phone (and in one video he is brandishing a knife). 40 CORRECTIONS FORUM • SEPTEMBER/OCTOBER 2017

As reported by Business Wire, this is not the first time he has been caught with a cell phone. While this is a clear violation of laws and policies, it also might be considered an annoyance by some: an inmate seeking and getting attention. There is a much darker side, though. In one horrific example, in 2016, a DeKalb County, Georgia, gang leader was indicted for ordering the hit on a nine-month old baby boy in retaliation for the child’s uncle killing a rival gang member. It is events like this that have correctional facilities calling for the FCC to allow correctional facili-

ties to jam cell phones. According to an FCC statement, the FCC has made it a priority to address contraband cell phone use by inmates. Cell phones have been used to arrange the murder of witnesses and public officers, traffic drugs, and continue to manage criminal enterprises while incarcerated. Cell phone jamming technology is illegal, though, and can cause problems. For one, it can interfere with 911 calls and other public safety communication. The Communications Act prohibits non-federal entities from using cell jamming technologies, and it cannot be