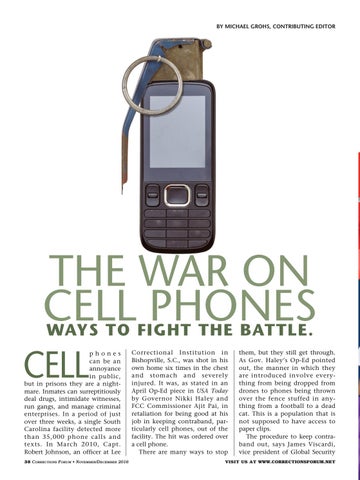 THE WAR ON CELL PHONES WAYS TO FIGHT THE BATTLE.

phones can be an annoyance in public, but in prisons they are a nightmare. Inmates can surreptitiously deal drugs, intimidate witnesses, run gangs, and manage criminal enterprises. In a period of just over three weeks, a single South Carolina facility detected more than 35,000 phone calls and texts. In March 2010, Capt. Robert Johnson, an officer at Lee

Correctional Institution in Bishopville, S.C., was shot in his own home six times in the chest and stomach and severely injured. It was, as stated in an April Op-Ed piece in USA Today by Governor Nikki Haley and FCC Commissioner Ajit Pai, in retaliation for being good at his job in keeping contraband, particularly cell phones, out of the facility. The hit was ordered over a cell phone. There are many ways to stop

them, but they still get through. As Gov. Haleyâ&amp;#x20AC;&amp;#x2122;s Op-Ed pointed out, the manner in which they are introduced involve everything from being dropped from drones to phones being thrown over the fence stuffed in anything from a football to a dead cat. This is a population that is not supposed to have access to paper clips. The procedure to keep contraband out, says James Viscardi, vice president of Global Security