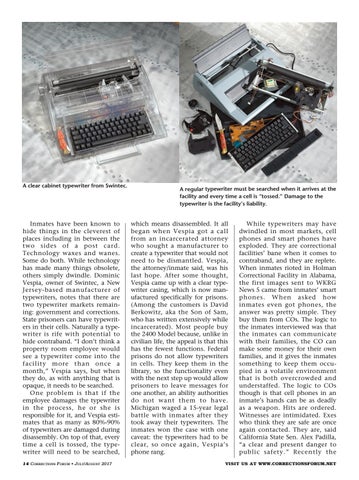 A clear cabinet typewriter from Swintec.

Inmates have been known to hide things in the cleverest of places including in between the two sides of a post card. Technology waxes and wanes. Some do both. While technology has made many things obsolete, others simply dwindle. Dominic Vespia, owner of Swintec, a New Jersey-based manufacturer of typewriters, notes that there are two typewriter markets remaining: government and corrections. State prisoners can have typewriters in their cells. Naturally a typewriter is rife with potential to hide contraband. “I don’t think a property room employee would see a typewriter come into the facility more than once a month,” Vespia says, but when they do, as with anything that is opaque, it needs to be searched. One problem is that if the employee damages the typewriter in the process, he or she is responsible for it, and Vespia estimates that as many as 80%-90% of typewriters are damaged during disassembly. On top of that, every time a cell is tossed, the typewriter will need to be searched, 14 CORRECTIONS FORUM • JULY/AUGUST 2017

A regular typewriter must be searched when it arrives at the facility and every time a cell is “tossed.” Damage to the typewriter is the facility’s liability.

which means disassembled. It all began when Vespia got a call from an incarcerated attorney who sought a manufacturer to create a typewriter that would not need to be dismantled. Vespia, the attorney/inmate said, was his last hope. After some thought, Vespia came up with a clear typewriter casing, which is now manufactured specifically for prisons. (Among the customers is David Berkowitz, aka the Son of Sam, who has written extensively while incarcerated). Most people buy the 2400 Model because, unlike in civilian life, the appeal is that this has the fewest functions. Federal prisons do not allow typewriters in cells. They keep them in the library, so the functionality even with the next step up would allow prisoners to leave messages for one another, an ability authorities do not want them to have. Michigan waged a 15-year legal battle with inmates after they took away their typewriters. The inmates won the case with one caveat: the typewriters had to be clear, so once again, Vespia’s phone rang.

While typewriters may have dwindled in most markets, cell phones and smart phones have exploded. They are correctional facilities’ bane when it comes to contraband, and they are replete. When inmates rioted in Holman Correctional Facility in Alabama, the first images sent to WKRG News 5 came from inmates’ smart phones. When asked how inmates even got phones, the answer was pretty simple. They buy them from COs. The logic to the inmates interviewed was that the inmates can communicate with their families, the CO can make some money for their own families, and it gives the inmates something to keep them occupied in a volatile environment that is both overcrowded and understaffed. The logic to COs though is that cell phones in an inmate’s hands can be as deadly as a weapon. Hits are ordered. Witnesses are intimidated. Exes who think they are safe are once again contacted. They are, said California State Sen. Alex Padilla, “a clear and present danger to public safety.” Recently the