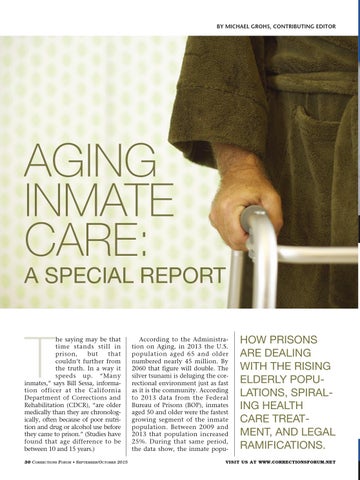 AGING INMATE CARE: A SPECIAL REPORT he saying may be that time stands still in prison, but that couldn’t further from the truth. In a way it speeds up. “Many inmates,” says Bill Sessa, information officer at the California Department of Corrections and Rehabilitation (CDCR), “are older medically than they are chronologically, often because of poor nutrition and drug or alcohol use before they came to prison.” (Studies have found that age difference to be between 10 and 15 years.)

According to the Administration on Aging, in 2013 the U.S. population aged 65 and older numbered nearly 45 million. By 2060 that figure will double. The silver tsunami is deluging the correctional environment just as fast as it is the community. According to 2013 data from the Federal Bureau of Prisons (BOP), inmates aged 50 and older were the fastest growing segment of the inmate population. Between 2009 and 2013 that population increased 25%. During that same period, the data show, the inmate popu-

HOW PRISONS ARE DEALING WITH THE RISING ELDERLY POPULATIONS, SPIRALING HEALTH CARE TREATMENT, AND LEGAL RAMIFICATIONS.