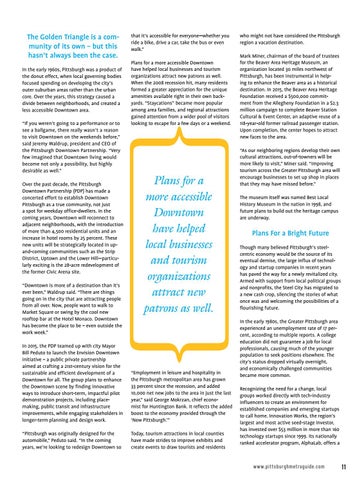 The Golden Triangle is a community of its own – but this hasn’t always been the case. In the early 1960s, Pittsburgh was a product of the donut effect, when local governing bodies focused spending on developing the city’s outer suburban areas rather than the urban core. Over the years, this strategy caused a divide between neighborhoods, and created a less accessible Downtown area. “If you weren’t going to a performance or to see a ballgame, there really wasn’t a reason to visit Downtown on the weekends before,” said Jeremy Waldrup, president and CEO of the Pittsburgh Downtown Partnership. “Very few imagined that Downtown living would become not only a possibility, but highly desirable as well.” Over the past decade, the Pittsburgh Downtown Partnership (PDP) has made a concerted effort to establish Downtown Pittsburgh as a true community, not just a spot for weekday office-dwellers. In the coming years, Downtown will reconnect to adjacent neighborhoods, with the introduction of more than 4,500 residential units and an increase in hotel rooms by 25 percent. These new units will be strategically located in upand-coming communities such as the Strip District, Uptown and the Lower Hill—particularly exciting is the 28-acre redevelopment of the former Civic Arena site. “Downtown is more of a destination than it’s ever been,” Waldrup said. “There are things going on in the city that are attracting people from all over. Now, people want to walk to Market Square or swing by the cool new rooftop bar at the Hotel Monaco. Downtown has become the place to be – even outside the work week.”

that it’s accessible for everyone—whether you ride a bike, drive a car, take the bus or even walk.” Plans for a more accessible Downtown have helped local businesses and tourism organizations attract new patrons as well. When the 2008 recession hit, many residents formed a greater appreciation for the unique amenities available right in their own backyards. “Staycations” became more popular among area families, and regional attractions gained attention from a wider pool of visitors looking to escape for a few days or a weekend.

In 2015, the PDP teamed up with city Mayor Bill Peduto to launch the Envision Downtown initiative – a public private partnership aimed at crafting a 21st-century vision for the sustainable and efficient development of a Downtown for all. The group plans to enhance the Downtown scene by finding innovative ways to introduce short-term, impactful pilot demonstration projects, including placemaking, public transit and infrastructure improvements, while engaging stakeholders in longer-term planning and design work.

“Employment in leisure and hospitality in the Pittsburgh metropolitan area has grown 33 percent since the recession, and added 10,000 net new jobs to the area in just the last year,” said George Mokrzan, chief economist for Huntington Bank. It reflects the added boost to the economy provided through the ‘New Pittsburgh.’”

“Pittsburgh was originally designed for the automobile,” Peduto said. “In the coming years, we’re looking to redesign Downtown so

Today, tourism attractions in local counties have made strides to improve exhibits and create events to draw tourists and residents

who might not have considered the Pittsburgh region a vacation destination. Mark Miner, chairman of the board of trustees for the Beaver Area Heritage Museum, an organization located 30 miles northwest of Pittsburgh, has been instrumental in helping to enhance the Beaver area as a historical destination. In 2015, the Beaver Area Heritage Foundation received a $500,000 commitment from the Allegheny Foundation in a $2.3 million campaign to complete Beaver Station Cultural &amp; Event Center, an adaptive reuse of a 118-year-old former railroad passenger station. Upon completion, the center hopes to attract new faces to the area. “As our neighboring regions develop their own cultural attractions, out-of-towners will be more likely to visit,” Miner said. “Improving tourism across the Greater Pittsburgh area will encourage businesses to set up shop in places that they may have missed before.” The museum itself was named Best Local History Museum in the nation in 1998, and future plans to build out the heritage campus are underway.

Plans For a Bright Future Though many believed Pittsburgh’s steelcentric economy would be the source of its eventual demise, the large influx of technology and startup companies in recent years has paved the way for a newly revitalized city. Armed with support from local political groups and nonprofits, the Steel City has migrated to a new cash crop, silencing the stories of what once was and welcoming the possibilities of a flourishing future. In the early 1980s, the Greater Pittsburgh area experienced an unemployment rate of 17 percent, according to multiple reports. A college education did not guarantee a job for local professionals, causing much of the younger population to seek positions elsewhere. The city’s status dropped virtually overnight, and economically challenged communities became more common. Recognizing the need for a change, local groups worked directly with tech-industry influencers to create an environment for established companies and emerging startups to call home. Innovation Works, the region’s largest and most active seed-stage investor, has invested over $53 million in more than 160 technology startups since 1999. Its nationally ranked accelerator program, AlphaLab, offers a