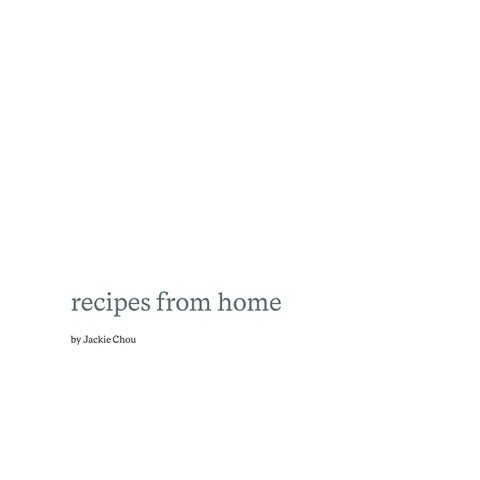 recipes from home by Jackie Chou

â&#x20AC;&#x153;Both of my parents grew up in Cambodia. In their teens, there was the Pol Pot regime, so they went through a genocide. They both ended up meeting up at a refugee camp in Thailand. My dad was sent to America, and my mom was sent to France. My dad sponsored my mom and they started their life in America.â&#x20AC;?

â&#x20AC;&#x153;I think immigrant families have to go through a lot... like language barriers, poverty, and cultural differences when adjusting to life in a new country.â&#x20AC;?

â&#x20AC;&#x153;My mom wanted to learn how to make spring rolls after we went to eat at a lot of pho places. It became a thing where we would make spring rolls together. I would be in charge of the rice paper and making it wet, kind of like an assembly line.â&#x20AC;?

â&#x20AC;&#x153;We experimented a lot with the filling ingredients. My sister and my dad would request for certain things to be in the spring rolls, and we just made them together.â&#x20AC;?

“I think I’ve learned to appreciate both cultures. It was always nice when my mom would come to my room and ask me to eat or pack my lunches.”

I think food is a powerful way to bring people together, and to ultimately say ‘I love you.’”

â&#x20AC;&#x153;I was born in New York City, but I was raised in Ecuador from age 3 to 9. It was different from living in the US. We lived in Guayaquil with my grandma. Having maids is pretty common in Ecuador, so they cooked for us. They made this dish a lot and a bunch of different soups.â&#x20AC;?

“We moved to Ecuador because my mom was a single mother, and it was easier to focus on her career and education in Ecuador. It’s less expensive and a bit more rigorous.”

“Over there, it’s basically summer all year round and Christmas lines up with the rainy season. Closer to midnight, after sunset, me and my sister would hop on a couch and raise our feet, and crickets would burst out of the ground and flood every house. It would look like a plague every Christmas. We would wait for our family members to kill all the crickets because we were terrified. And then we would go to the Christmas tree and open all the presents.”

“I was born in Peru. My mom was a preschool teacher and my dad was actually a shoemaker. There’s a bunch of corruption and a high cost of living, which is why we wanted to move out of there.”

“My Dad came over first and found a job in construction. Then we moved over and joined him in America. I lived in LA until I went to Carnegie Mellon. I love LA. I would not live anywhere else. Anything you want is there—Korean food, the beach, it’s all there. If you want snow, you have Big Bear.”

â&#x20AC;&#x153;I usually eat half Chipotle, half ramen, so this is considered a nicer meal for me. This dish is how I survived sophomore year.â&#x20AC;?

“Because of macho culture in Latin America, men don’t cook. Women cook—men don’t cook. I didn’t learn anything from my mom or my grandma, who make a bunch of Peruvian food. I had to teach myself how to cook.”

“Transitioning to life in LA was pretty hard because of the language barrier. My parents learned English, so that helped a lot. There aren’t many Peruvians here in the States, we only make up around 1 percent of the entire US Latino population. It’s a really long trip, and you have to travel through a lot of countries to immigrate into the US. That’s why there aren’t that many of us.”

“Wait—I’m going to send this to my mom.”

“I would describe my culture as less of Polish culture and more of Polish immigrant culture. They’re kind of different. It mixes with American culture and we do a lot of things that people in Poland don’t do.”

“Back when we went to church, we got a new priest who was Polish. We gave him these cookies, and he pretty much teared up. So I guess they’re popular!”

“Food is a big part, or like the only part, of how we identify as Polish-American. My mom really cares about preserving Polish traditions, but her siblings don’t really care as much.”

“I’m grateful that my mom tries to teach us how to make Polish food.”

from the author I think food, especially for people who start new lives in foreign countries, is an incredibly powerful symbol of culture, identity, and shared love. Like music, food is a universal language, and this book is dedicated to sharing some of the stories and memories we all have about food. This book was photographed and designed in Spring 2019, as part of Charlee Brodskyâ&#x20AC;&#x2122;s Photographic Narrative class. I photographed four different people cooking food from their culture and asked them to tell stories from home. The project culminated in a h...

I photographed four different people cooking food from their culture and asked them to tell stories from home. The project culminated in a h...