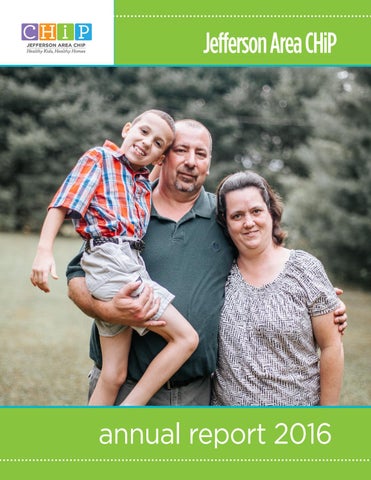 A Message from the Executive Director

We have had a great, busy and challenging year at Jefferson Area CHiP! As we gear up for the challenges of 2017, it’s good to remember some of the joys of 2016. • Our partnership with Piedmont Pediatrics, the first of its kind in Virginia and perhaps the country, helped us to serve 35 new families and learn about the benefits of working directly with a physician practice. • We received a three-year grant from the Adiuvans Foundation and have created a new neighborhood outreach team. Based near downtown and focusing on several of our community’s most economically challenged neighborhoods, the team will serve an additional 75-80 children and their families. • Overall, CHIP partnered with 365 families (one for each day of the year!), creating a brighter and healthier future for 560 children. Your support of the work of CHIP makes these new initiatives possible, and makes a critical difference in the health and future of children who need support the most. For everything that may change, the math for children in our community is the same. Babies have about 2,000 days from birth to their arrival at kindergarten. Those 2,000 days are critical in the healthy development of each child. Given the opportunity and support, families can overcome barriers and can provide nurturing homes for their children. As we meet the challenges of the year ahead, CHIP is committed to walking side by side with the families we serve. Whatever we face, we are happy to know that CHIP families, staff, board and supporters will face them together. We hope you will drop in and say hello! Thanks for all you do! With warmest regards, Jon Nafziger Executive Director

From Our Board Chair Dear CHiP Partners, As a mom, I know how difficult raising children can be, even under less challenging circumstances than most of our CHiP families face. The key to these families’ success is teamwork. CHiP teams up with families to offer them support, encouragement, information, and access to resources, which empowers them and allows them to navigate their way to success and self-sufficiency. It’s powerful. But the teamwork doesn’t end there. CHiP cannot do the work it does without the support of our community – your support. You are a critical member of the CHiP team, and your support extends to all of the families working with CHiP. Your good will and generosity energizes us all, and I thank you. Sincerely, Sharla Klingel, Chair Jefferson Area CHiP Board of Directors

CHiPâ&amp;#x20AC;&amp;#x2122;s mission: We partner with families to create nurturing home environments and promote the health and well-being of children in our community. We:

CHiPâ&amp;#x20AC;&amp;#x2122;s home visiting program is so effective because of the trusted relationships our diverse, knowledgeable, and compassionate staff build with CHiP families.

Equipping and empowering families, We meet families right where they live, with

Families enrolled in CHiP are less likely to have low birthweight and preterm babies, and CHiP babies spend 44% fewer days in the NICU. On average, one day in the NICU costs $3,000 or more.

who were pregnant or parenting got help keeping focused on their education and their futures. 6 of our 7 senior Parenteen moms graduated from high school last spring. Thatâ&amp;#x20AC;&amp;#x2122;s delivering hope... two generations at a time.

were healthier, happier, and better prepared for school, and parents gained confidence in their role as their childâ&amp;#x20AC;&amp;#x2122;s first and best teacher.

93 refugee families were served by our diverse and culturally competent staff.

CHiP WORKS. Data shows that after one year with CHiP, 100% of children have a medical home.

20 graduates who successfully achieved a level of parenting knowledge and skill to graduate from CHiP services.

to date on their immunizations.

essential milestones on the Ages and Stages Developmental screening tool, and those who needed further assessments had received them.

to date on well-child visits, a 37% increase from the time of enrollment.

80% of CHiP babies are breastfed.

75 children were enrolled in preschool programs.

least one parent employed, a 14% increase from the time of enrollment.

thank you Many thanks to the following donors who made generous contributions to CHiP between January 1-December 31, 2016.