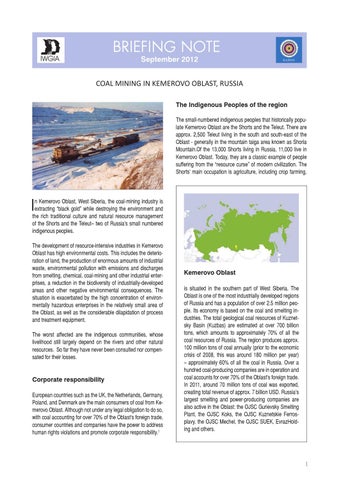 COAL MINING IN KEMEROVO OBLAST, RUSSIA The Indigenous Peoples of the region The small-numbered indigenous peoples that historically populate Kemerovo Oblast are the Shorts and the Teleut. There are approx. 2,500 Teleut living in the south and south-east of the Oblast - generally in the mountain taiga area known as Shoria Mountain.Of the 13,000 Shorts living in Russia, 11,000 live in Kemerovo Oblast. Today, they are a classic example of people suffering from the “resource curse” of modern civilization. The Shorts’ main occupation is agriculture, including crop farming,

n Kemerovo Oblast, West Siberia, the coal-mining industry is extracting “black gold” while destroying the environment and the rich traditional culture and natural resource management of the Shorts and the Teleut– two of Russia’s small numbered indigenous peoples. The development of resource-intensive industries in Kemerovo Oblast has high environmental costs. This includes the deterioration of land, the production of enormous amounts of industrial waste, environmental pollution with emissions and discharges from smelting, chemical, coal-mining and other industrial enterprises, a reduction in the biodiversity of industrially-developed areas and other negative environmental consequences. The situation is exacerbated by the high concentration of environmentally hazardous enterprises in the relatively small area of the Oblast, as well as the considerable dilapidation of process and treatment equipment. The worst affected are the indigenous communities, whose livelihood still largely depend on the rivers and other natural resources. So far they have never been consulted nor compensated for their losses.

Corporate responsibility European countries such as the UK, the Netherlands, Germany, Poland, and Denmark are the main consumers of coal from Kemerovo Oblast. Although not under any legal obligation to do so, with coal accounting for over 70% of the Oblast’s foreign trade, consumer countries and companies have the power to address human rights violations and promote corporate responsibility.1

Kemerovo Oblast is situated in the southern part of West Siberia. The Oblast is one of the most industrially developed regions of Russia and has a population of over 2.5 million people. Its economy is based on the coal and smelting industries. The total geological coal resources of Kuznetsky Basin (Kuzbas) are estimated at over 700 billion tons, which amounts to approximately 70% of all the coal resources of Russia. The region produces approx. 100 million tons of coal annually (prior to the economic crisis of 2008, this was around 180 million per year) – approximately 60% of all the coal in Russia. Over a hundred coal-producing companies are in operation and coal accounts for over 70% of the Oblast’s foreign trade. In 2011, around 70 million tons of coal was exported, creating total revenue of approx. 7 billion USD. Russia’s largest smelting and power-producing companies are also active in the Oblast: the OJSC Gurievsky Smelting Plant, the OJSC Koks, the OJSC Kuznetskie Ferrosplavy, the OJSC Mechel, the OJSC SUEK, EvrazHolding and others.

cattle farming and bee farming. However, they also continue to live from their traditional livelihoods, which are hunting, fishing and cedar nut harvesting. Today the small-numbered indigenous peoples account for only 0.5% of Kemerovo Oblast’s population. Although there are no purely Shorts or Teleut settlements in the Oblast, there are several dozen settlements with a dominant Shorts or Teleut population; in most cases, these are very small villages.

The environmental situation The environmental situation in Kemerovo Oblast is bleak according to all experts. A report entitled “The Status of the Environment in Kemerovo Oblast in 2011”, drafted by the Regional Administration, for example says that the average atmospheric concentration of specific pollutants in Kemerovo Oblast is 2-3 times the maximum allowable concentrations stipulated by Russian law and, in some cases, up to 18 times. The same report describes river water in areas of industrial activity as “polluted” or “heavily polluted”. In some cases, the experts speak of “extremely heavy pollution” of the water.2

The case of Kazas village A description of the scale of the coal mining industry’s impact on the indigenous communities can be found in a letter from the Shor, Veniamin Boriskin, sent to the Russian Association of Indigenous Peoples of the North (RAIPON) in February 2012, seeking help. He wrote about the problems of a small village called Kazas, situated in Myskovsky town district of Kemerovo Oblast: “Area 8 of Mezhdurechensky coal mine and Area 3 of Krasnogorsky coal mine conduct their activities right in the village territory, discharging waste into the Kazass River. Once abundant, the river has grown shallow and silted like a stream. On the left bank, there used to be a “green zone” which the managers promised not to touch. We also asked them not to touch the Lysaya Mountain which is sacred to us, and the mountain Tachi-

gey. These mountains used to shelter the village from the coal mines. But several years ago, Area 8 added a new strip mine, Beregovoy. This mine disregarded all the promises and began activities beyond the Kazass River. A huge territory has already been excavated and they are digging into the back of Tachigey Mountain. In addition, this summer we saw an excavator on our sacred mountain. The mines ignore the people of Kazas and continue to tear our land to pieces. The blasting operations are performed so close that we can see the stones flying. They have not reached the village. Yet. Once a large settlement of 50 houses with large families, the village has now nearly died out. The villagers never received anything in exchange for their treasures and have gone silently to their graves. At the edge of the village another has emerged – the cemetery”.

The village of Kazas is part of Chuvashinsky national village council (Selsoviet). In all, 520 Shorts live in 6 villages in the territory of this Selsoviet and make up 65% of its total population. 3 coal strip mines operate in the territory: Sibirginsky, Mezhdurechensky and Krasnogorsky. The mines’ activities have resulted in the destruction of the Shorts’ lands of traditional natural resource use, the rivers are polluted, the forest and wildlife destroyed. The indigenous population has received no compensation either for the destroyed lands or for the impacts on their traditional way of life. As the local people reported when construction of Sibirginsky mine began, the government expert evaluation documents specified the town of Myski as the nearest settlement to the mine – at a distance of 20 km. It means that neither Chuvashka village nor Kazas village are mentioned in the design documentation, and, consequently, their residents seem not to exist at all. Today, Kazas village is surrounded by coal strip mines and coal production infrastructure, with a railway on one side and, on the other, a contaminated river from which the villagers have to drink. They are asphyxiated all year round because of the coal dust, which literally covers everything. It penetrates into the houses and the people’s lungs, it lies in a thick layer on every surface. During large-scale blasting operations, the windows sometimes break in Kazas houses, structures are damaged and demolished, and houses fall

into decay. The village has neither a school nor a health centre, not a post office or a shop. Since 1994, the Chairman of Chuvashinsky Selsoviet, Egor Bekrenev, has been trying to make the coal companies pay compensation for their exploitation of the mineral resources to be used for social and economic development. However, a permanent and planned agreement was never reached with the coal companies. In addition, taxes from mineral resource extraction in Russia are paid either to the Federal (40 to 100%) or to the Regional budget. The municipality only receives the land tax and indirect payments from the industrial enterprises for operations in the municipal territory which accounts for an utterly insignificant share of the overall tax payments.

The government’s role The people of Kazas have written many complaints to numerous regional departments but the situation does not improve, and the authorities merely reply that sacrifices have to be made for the sake of regional economic development. At one time, the coal companies even established a checkpoint on the village access road so that their security personnel could stop and inspect private cars, including those belonging to the villagers. In this context, the interview given by the Governor of Kemerovo Oblast, Aman Tuleyev, to the Chelovek i Trud Magazine3 is revealing. He says a great deal about the challenges of the region’s industrial, social and even cultural development but virtually nothing about the region’s environmental problems. It should also be noted that Kemerovo Oblast Administration signs annual cooperation agreements with the coal companies, which

include specific clauses relating to measures for maintaining and developing the territories of traditional natural resource use for the small-numbered indigenous peoples of Kemerovo Oblast. However, according to the Oblast’s indigenous residents, nobody knows where this money goes.

Only one of many Hot Spots The bleak environmental and social situation of the village of Kazas is typical of Kemerovo Oblast. The list of “hot spots” where the situation is most difficult, compiled by activists from Kemerovo Oblast Indigenous Peoples’ Association jointly with experts, thus includes 12 more settlements of this kind. Any person new to the region arriving in Novokuznetsk will immediately notice the enormous black haze of polluted atmosphere hanging over the city; the only comparable Russian place that comes to mind is Norilsk, where the largest Russian smelter Nornikel is located. The Shorts live in the epicenter of this hell – gradually dying from disease. In the meantime, the “coal barons” continue to make billions of dollars selling “black gold”.

In Kemerovo Oblast, West Siberia, the coal-mining industry is extracting “black gold” while destroying the environment and the rich traditional culture and natural resource management of the Shorts and the Teleut– two of Russia’s small numbered indigenous peoples. This briefing note produced by the russian indigenous organisation RAIPON informs about this situation and urges, European countries such as the UK, the Netherlands, Germany,Poland, and Denmark, who are the main consumers of coal from Kemerovo Oblast to address these human rights violations and promote enhanced corporate responsibility. 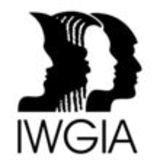