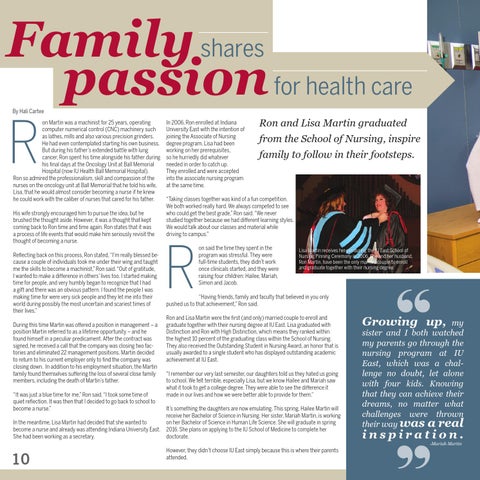 on Martin was a machinist for 25 years, operating computer numerical control (CNC) machinery such as lathes, mills and also various precision grinders. He had even contemplated starting his own business. But during his father’s extended battle with lung cancer, Ron spent his time alongside his father during his final days at the Oncology Unit at Ball Memorial Hospital (now IU Health Ball Memorial Hospital). Ron so admired the professionalism, skill and compassion of the nurses on the oncology unit at Ball Memorial that he told his wife, Lisa, that he would almost consider becoming a nurse if he knew he could work with the caliber of nurses that cared for his father. His wife strongly encouraged him to pursue the idea, but he brushed the thought aside. However, it was a thought that kept coming back to Ron time and time again. Ron states that it was a process of life events that would make him seriously revisit the thought of becoming a nurse. Reflecting back on this process, Ron stated, “I’m really blessed because a couple of individuals took me under their wing and taught me the skills to become a machinist,” Ron said. “Out of gratitude, I wanted to make a difference in others’ lives too. I started making time for people, and very humbly began to recognize that I had a gift and there was an obvious pattern. I found the people I was making time for were very sick people and they let me into their world during possibly the most uncertain and scariest times of their lives.” During this time Martin was offered a position in management – a position Martin referred to as a lifetime opportunity – and he found himself in a peculiar predicament. After the contract was signed, he received a call that the company was closing two factories and eliminated 22 management positions. Martin decided to return to his current employer only to find the company was closing down. In addition to his employment situation, the Martin family found themselves suffering the loss of several close family members, including the death of Martin’s father. “It was just a blue time for me,” Ron said. “I took some time of quiet reflection. It was then that I decided to go back to school to become a nurse.” In the meantime, Lisa Martin had decided that she wanted to become a nurse and already was attending Indiana University East. She had been working as a secretary.

In 2006, Ron enrolled at Indiana University East with the intention of joining the Associate of Nursing degree program. Lisa had been working on her prerequisites, so he hurriedly did whatever needed in order to catch up. They enrolled and were accepted into the associate nursing program at the same time.

Ron and Lisa Martin graduated from the School of Nursing, inspire family to follow in their footsteps.

“Taking classes together was kind of a fun competition. We both worked really hard. We always competed to see who could get the best grade,” Ron said. “We never studied together because we had different learning styles. We would talk about our classes and material while driving to campus.”

on said the time they spent in the program was stressful. They were full-time students, they didn’t work once clinicals started, and they were raising four children: Hailee, Mariah, Simon and Jacob.

Lisa Martin receives her pin during the IU East School of Nursing Pinning Ceremony in 2006. She and her husband, Ron Martin, have been the only married couple to enroll and graduate together with their nursing degree.

“Having friends, family and faculty that believed in you only pushed us to that achievement,” Ron said. Ron and Lisa Martin were the first (and only) married couple to enroll and graduate together with their nursing degree at IU East. Lisa graduated with Distinction and Ron with High Distinction, which means they ranked within the highest 10 percent of the graduating class within the School of Nursing. They also received the Outstanding Student in Nursing Award, an honor that is usually awarded to a single student who has displayed outstanding academic achievement at IU East. “I remember our very last semester, our daughters told us they hated us going to school. We felt terrible, especially Lisa, but we know Hailee and Mariah saw what it took to get a college degree. They were able to see the difference it made in our lives and how we were better able to provide for them.” It’s something the daughters are now emulating. This spring, Hailee Martin will receive her Bachelor of Science in Nursing. Her sister, Mariah Martin, is working on her Bachelor of Science in Human Life Science. She will graduate in spring 2016. She plans on applying to the IU School of Medicine to complete her doctorate.

my sister and I both watched my parents go through the nursing program at IU East, which was a challenge no doubt, let alone with four kids. Knowing that they can achieve their dreams, no matter what challenges were thrown their way was a real

However, they didn’t choose IU East simply because this is where their parents attended. 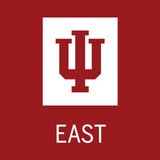