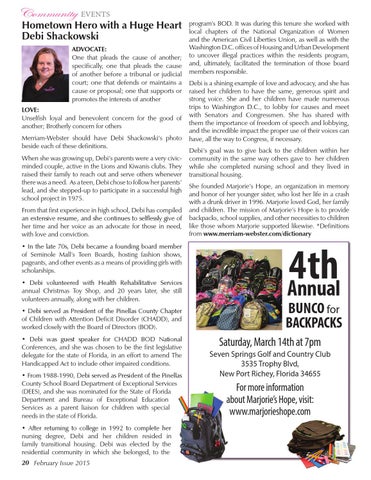 LOVE: Unselfish loyal and benevolent concern for the good of another; Brotherly concern for others Merriam-Webster should have Debi Shackowski‘s photo beside each of these definitions. When she was growing up, Debi’s parents were a very civicminded couple, active in the Lions and Kiwanis clubs. They raised their family to reach out and serve others whenever there was a need. As a teen, Debi chose to follow her parents’ lead, and she stepped-up to participate in a successful high school project in 1975. From that first experience in high school, Debi has compiled an extensive resume, and she continues to selflessly give of her time and her voice as an advocate for those in need, with love and conviction. • In the late 70s, Debi became a founding board member of Seminole Mall’s Teen Boards, hosting fashion shows, pageants, and other events as a means of providing girls with scholarships. • Debi volunteered with Health Rehabilitative Services annual Christmas Toy Shop, and 20 years later, she still volunteers annually, along with her children. • Debi served as President of the Pinellas County Chapter of Children with Attention Deficit Disorder (CHADD), and worked closely with the Board of Directors (BOD). • Debi was guest speaker for CHADD BOD National Conferences, and she was chosen to be the first legislative delegate for the state of Florida, in an effort to amend The Handicapped Act to include other impaired conditions. • From 1988-1990, Debi served as President of the Pinellas County School Board Department of Exceptional Services (DEES), and she was nominated for the State of Florida Department and Bureau of Exceptional Education Services as a parent liaison for children with special needs in the state of Florida.

program’s BOD. It was during this tenure she worked with local chapters of the National Organization of Women and the American Civil Liberties Union, as well as with the Washington D.C. offices of Housing and Urban Development to uncover illegal practices within the residents program, and, ultimately, facilitated the termination of those board members responsible. Debi is a shining example of love and advocacy, and she has raised her children to have the same, generous spirit and strong voice. She and her children have made numerous trips to Washington D.C., to lobby for causes and meet with Senators and Congressmen. She has shared with them the importance of freedom of speech and lobbying, and the incredible impact the proper use of their voices can have, all the way to Congress, if necessary. Debi’s goal was to give back to the children within her community in the same way others gave to her children while she completed nursing school and they lived in transitional housing. She founded Marjorie’s Hope, an organization in memory and honor of her younger sister, who lost her life in a crash with a drunk driver in 1996. Marjorie loved God, her family and children. The mission of Marjorie’s Hope is to provide backpacks, school supplies, and other necessities to children like those whom Marjorie supported likewise. *Definitions from www.merriam-webster.com/dictionary

• After returning to college in 1992 to complete her nursing degree, Debi and her children resided in family transitional housing. Debi was elected by the residential community in which she belonged, to the 20 February Issue 2015 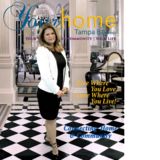 It's Your Home Magazine, Trinity/Odessa - February 2015

It's Your Home Magazine - Trinity's #1 Resource for Community Information. A mix of local business, community information and fun! Trinity...

It's Your Home Magazine, Trinity/Odessa - February 2015

It's Your Home Magazine - Trinity's #1 Resource for Community Information. A mix of local business, community information and fun! Trinity...