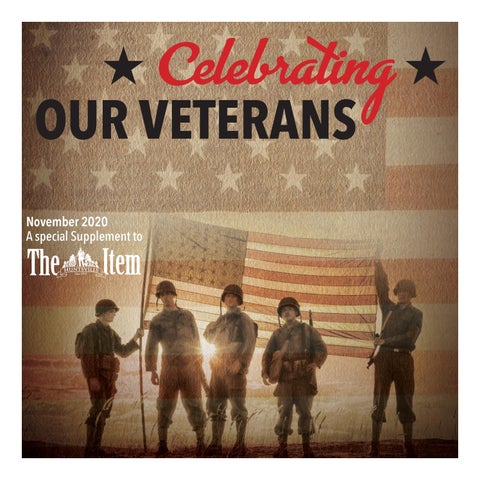 H CELEBRATING H OUR VETERANS November 2020 A special Supplement to

Honoring All Who Served

The history of Veterans Day

n Nov. 11, we celebrate Veterans Day, a small way to salute those who served and pray for those who fell. But the version of Veterans Day we know now wasn’t always so. It wasn’t always a holiday, it wasn’t always on Nov. 11 and, at first, it wasn’t even called Veterans Day. Veterans Day, formerly known as Armistice Day, was originally set as a U.S. legal holiday to honor the end of World War I, which officially took place on November 11, 1918. In legislation that was passed in 1938, November 11 was “dedicated to the cause of world peace and to be hereafter celebrated and known as ‘Armistice Day.’” As such, this new legal holiday honored World War I veterans. In 1954, after having been through both

World War II and the Korean War, the 83rd U.S. Congress — at the urging of the veterans service organizations — amended the Act of 1938 by striking out the word “Armistice” and inserting the word “Veterans.” With the approval of this legislation on June 1, 1954, Nov. 11 became a day to honor American veterans of all wars. In 1968, the Uniforms Holiday Bill ensured three-day weekends for federal employees by celebrating four national holidays on Mondays: Washington’s Birthday, Memorial Day, Veterans Day, and Columbus Day. Under this bill, Veterans Day was moved to the fourth Monday of October. Many states did not agree with this decision and continued to celebrate the holiday on its original date. The first Veterans Day under the new law was observed with much confusion

on Oct. 25, 1971. Finally on September 20, 1975, President Gerald R. Ford signed a law which returned the annual observance of Veterans Day to its original date of Nov. 11, beginning in 1978. Since then, the Veterans Day holiday has been observed on Nov. 11. Much has changed in the 101 years since Armistice Day was first observed. Now we honor not just servicemen, but servicewomen. The war to end all wars didn’t end war at all, as soldiers continue to fight for our freedoms all over the globe. But through the past century, despite its different names and dates, the purpose of Veterans Day has remained the same — to say thanks.

Remembering when America was at war

— The U.S. Department of Veterans Affairs notes there are just under 17 1525veterans Sam Houston Avenue million alive who• Huntsville served in war time. Combined with peace time 936-295-5448 • 800-547-1966 veterans, that number climbs to just over 23 million men and women. www.huntsvilleheartfieldflorist.com

Honoring Our Brave Veterans Greater love hath no man than this, that a man lay down his life for his friends. – John 15:13

Honoring All Who Have Served. Thank You

u for your ser o y k vic an

or nearly three decades the H.E.A.R.T.S. Veterans Museum of Texas has not only been a teaching museum to recognize heroes from wartime, but also a place of support for the countless veterans in the region. The creation of the HEARTS Veterans Museum of Texas is a remarkable story of a patriotic gesture turned into a moment of inspiration, and nurtured with an overwhelming grassroots effort into a full-fledged museum honoring the service of the American veteran. The museum traces its origins to 1993 when Charlotte Oleinik placed a Veterans Day display honoring Huntsville native, Brigadier General Ray Lynch, in the window of the Bluebonnet Square Antiques Shop. By 1995, Charlotte was a member of a committee that organized the celebration of the 50th anniversary of the end of World War II. At

the request of a history teacher at Mance Park Middle School, Janet McMillan, local veterans involved in the celebration spoke to her students about their experiences in war and the military, illustrating their talks with memorabilia and artifacts from their personal collections. After the year of celebration, Oleinik, joined by World War II veteran Charles Davis, continued presentations in Walker County schools, transporting and setting up exhibits at each school. In 1999, the duo placed a small exhibit on the timeline of the wars in the 20th century at West Hill Shopping Mall in Huntsville. By this time the memorabilia and artifacts used by veterans in their presentations had grown to the point that it was impossible to use much of it in a school setting. The West Hill Shopping Mall offered a vacant space in the mall to house a museum for the artifacts.

As word spread among area veterans, the collection of military artifacts and memorabilia used in their presentations began to grow. Eventually the collection outgrew their ability to travel with it, and they recognized the need for a permanent location for them. The idea for the HEARTS Veterans Museum of Texas as a hands-on, living history museum was born. The museum began operation in a leased space in the West Hill Mall in 1994, and began a campaign to fund and build a new museum building. It wasnâ&amp;#x20AC;&amp;#x2122;t until 2009 that construction would begin on the Veterans Museum, with the grand opening ceremony appropriately held on Nov. 11, 2009. Today, the museum hosts multiple outreach events, including a monthly veterans breakfast, alongside celebrations to honor and recognize veterans.

Veterans from across Walker County participated in the 2020 Veterans Outreach Festival last month at the H.E.A.R.T.S. Veterans Museum of Texas in Huntsville. Photos by Joseph Brown | The Item