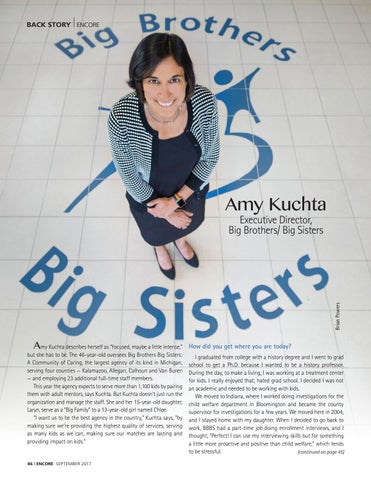 Amy Kuchta describes herself as “focused, maybe a little intense,”

but she has to be. The 46-year-old oversees Big Brothers Big Sisters: A Community of Caring, the largest agency of its kind in Michigan, serving four counties — Kalamazoo, Allegan, Calhoun and Van Buren — and employing 23 additional full-time staff members. This year the agency expects to serve more than 1,100 kids by pairing them with adult mentors, says Kuchta. But Kuchta doesn’t just run the organization and manage the staff. She and her 15-year-old daughter, Laryn, serve as a “Big Family” to a 13-year-old girl named Chloe. “I want us to be the best agency in the country,” Kuchta says, “by making sure we’re providing the highest quality of services, serving as many kids as we can, making sure our matches are lasting and providing impact on kids.”

How did you get where you are today? I graduated from college with a history degree and I went to grad school to get a Ph.D. because I wanted to be a history professor. During the day, to make a living, I was working at a treatment center for kids. I really enjoyed that; hated grad school. I decided I was not an academic and needed to be working with kids. We moved to Indiana, where I worked doing investigations for the child welfare department in Bloomington and became the county supervisor for investigations for a few years. We moved here in 2004, and I stayed home with my daughter. When I decided to go back to work, BBBS had a part-time job doing enrollment interviews, and I thought, "Perfect! I can use my interviewing skills but for something a little more proactive and positive than child welfare," which tends to be stressful. (continued on page 45)