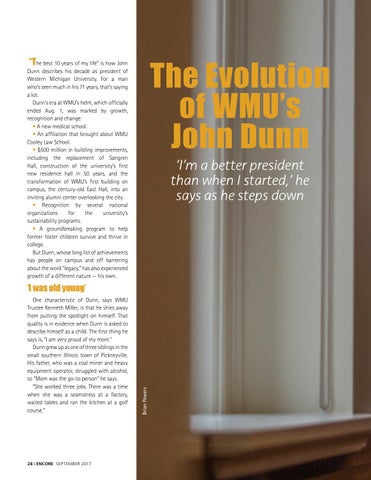 The Evolution of WMU’s John Dunn

Dunn describes his decade as president of Western Michigan University. For a man who’s seen much in his 71 years, that’s saying a lot. Dunn’s era at WMU’s helm, which officially ended Aug. 1, was marked by growth, recognition and change: • A new medical school. • An affiliation that brought about WMU Cooley Law School. • $500 million in building improvements, including the replacement of Sangren Hall, construction of the university’s first new residence hall in 50 years, and the transformation of WMU’s first building on campus, the century-old East Hall, into an inviting alumni center overlooking the city. • Recognition by several national organizations for the university’s sustainability programs. • A groundbreaking program to help former foster children survive and thrive in college. But Dunn, whose long list of achievements has people on campus and off bantering about the word “legacy,” has also experienced growth of a different nature — his own.

‘I’m a better president than when I started,’ he says as he steps down

One characteristic of Dunn, says WMU Trustee Kenneth Miller, is that he shies away from putting the spotlight on himself. That quality is in evidence when Dunn is asked to describe himself as a child. The first thing he says is, “I am very proud of my mom.” Dunn grew up as one of three siblings in the small southern Illinois town of Pickneyville. His father, who was a coal miner and heavy equipment operator, struggled with alcohol, so “Mom was the go-to person” he says. “She worked three jobs. There was a time when she was a seamstress at a factory, waited tables and ran the kitchen at a golf course.”

‘I was old young’