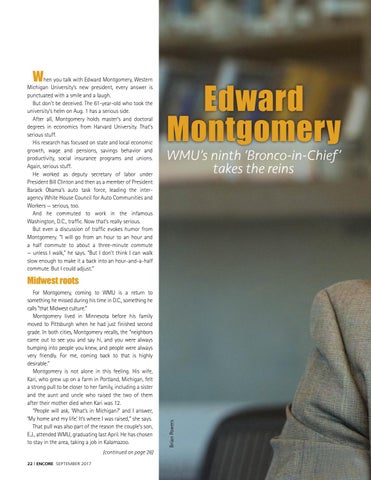 hen you talk with Edward Montgomery, Western Michigan University’s new president, every answer is punctuated with a smile and a laugh. But don’t be deceived. The 61-year-old who took the university’s helm on Aug. 1 has a serious side. After all, Montgomery holds master’s and doctoral degrees in economics from Harvard University. That’s serious stuff. His research has focused on state and local economic growth, wage and pensions, savings behavior and productivity, social insurance programs and unions. Again, serious stuff. He worked as deputy secretary of labor under President Bill Clinton and then as a member of President Barack Obama’s auto task force, leading the interagency White House Council for Auto Communities and Workers — serious, too. And he commuted to work in the infamous Washington, D.C., traffic. Now that’s really serious. But even a discussion of traffic evokes humor from Montgomery. “I will go from an hour to an hour and a half commute to about a three-minute commute — unless I walk,” he says. “But I don’t think I can walk slow enough to make it a back into an hour-and-a-half commute. But I could adjust.”

For Montgomery, coming to WMU is a return to something he missed during his time in D.C., something he calls “that Midwest culture.” Montgomery lived in Minnesota before his family moved to Pittsburgh when he had just finished second grade. In both cities, Montgomery recalls, the “neighbors came out to see you and say hi, and you were always bumping into people you knew, and people were always very friendly. For me, coming back to that is highly desirable.” Montgomery is not alone in this feeling. His wife, Kari, who grew up on a farm in Portland, Michigan, felt a strong pull to be closer to her family, including a sister and the aunt and uncle who raised the two of them after their mother died when Kari was 12. “People will ask, ‘What’s in Michigan?’ and I answer, ‘My home and my life.’ It’s where I was raised,” she says. That pull was also part of the reason the couple’s son, E.J., attended WMU, graduating last April. He has chosen to stay in the area, taking a job in Kalamazoo. (continued on page 26) 22 | Encore SEPTEMBER 2017