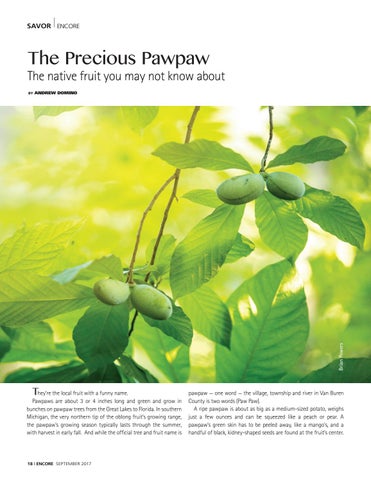 The native fruit you may not know about by

The pawpaw tree’s small flowers, only an inch or two wide, turn from green to dark purple over the course of a few weeks, as the long, green leaves continue to grow. The flowers can also smell like yeast. Pawpaws are often pollinated by flies and beetles, not bees.

They’re the local fruit with a funny name.

Pawpaws are about 3 or 4 inches long and green and grow in bunches on pawpaw trees from the Great Lakes to Florida. In southern Michigan, the very northern tip of the oblong fruit’s growing range, the pawpaw’s growing season typically lasts through the summer, with harvest in early fall. And while the official tree and fruit name is

pawpaw — one word — the village, township and river in Van Buren County is two words (Paw Paw). A ripe pawpaw is about as big as a medium-sized potato, weighs just a few ounces and can be squeezed like a peach or pear. A pawpaw’s green skin has to be peeled away, like a mango’s, and a handful of black, kidney-shaped seeds are found at the fruit’s center.