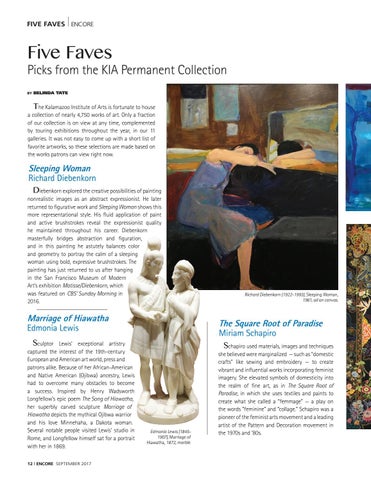 Picks from the KIA Permanent Collection by

The Kalamazoo Institute of Arts is fortunate to house

a collection of nearly 4,750 works of art. Only a fraction of our collection is on view at any time, complemented by touring exhibitions throughout the year, in our 11 galleries. It was not easy to come up with a short list of favorite artworks, so these selections are made based on the works patrons can view right now.

Sleeping Woman Richard Diebenkorn Diebenkorn explored the creative possibilities of painting nonrealistic images as an abstract expressionist. He later returned to figurative work and Sleeping Woman shows this more representational style. His fluid application of paint and active brushstrokes reveal the expressionist quality he maintained throughout his career. Diebenkorn masterfully bridges abstraction and figuration, and in this painting he astutely balances color and geometry to portray the calm of a sleeping woman using bold, expressive brushstrokes. The painting has just returned to us after hanging in the San Francisco Museum of Modern Art’s exhibition Matisse/Diebenkorn, which was featured on CBS’ Sunday Morning in 2016.

Marriage of Hiawatha Edmonia Lewis Sculptor Lewis’ exceptional artistry captured the interest of the 19th-century European and American art world, press and patrons alike. Because of her African-American and Native American (Ojibwa) ancestry, Lewis had to overcome many obstacles to become a success. Inspired by Henry Wadsworth Longfellow’s epic poem The Song of Hiawatha, her superbly carved sculpture Marriage of Hiawatha depicts the mythical Ojibwa warrior and his love Minnehaha, a Dakota woman. Several notable people visited Lewis’ studio in Rome, and Longfellow himself sat for a portrait with her in 1869. 12 | Encore SEPTEMBER 2017

Schapiro used materials, images and techniques she believed were marginalized — such as “domestic crafts” like sewing and embroidery — to create vibrant and influential works incorporating feminist imagery. She elevated symbols of domesticity into the realm of fine art, as in The Square Root of Paradise, in which she uses textiles and paints to create what she called a “femmage” — a play on the words “feminine” and “collage.” Schapiro was a pioneer of the feminist arts movement and a leading artist of the Pattern and Decoration movement in the 1970s and ’80s.