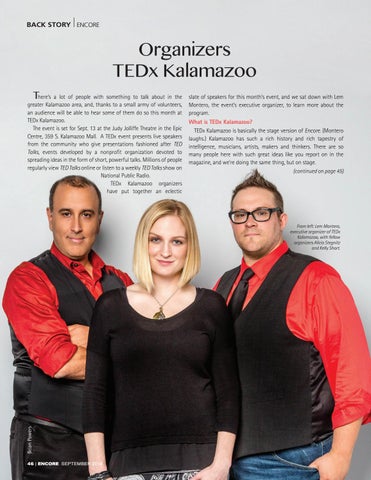 here’s a lot of people with something to talk about in the greater Kalamazoo area, and, thanks to a small army of volunteers, an audience will be able to hear some of them do so this month at TEDx Kalamazoo. The event is set for Sept. 13 at the Judy Jolliffe Theatre in the Epic Centre, 359 S. Kalamazoo Mall. A TEDx event presents live speakers from the community who give presentations fashioned after TED Talks, events developed by a nonprofit organization devoted to spreading ideas in the form of short, powerful talks. Millions of people regularly view TED Talks online or listen to a weekly TED Talks show on National Public Radio. TEDx Kalamazoo organizers have put together an eclectic

slate of speakers for this month’s event, and we sat down with Lem Montero, the event’s executive organizer, to learn more about the program. What is TEDx Kalamazoo? TEDx Kalamazoo is basically the stage version of Encore. (Montero laughs.) Kalamazoo has such a rich history and rich tapestry of intelligence, musicians, artists, makers and thinkers. There are so many people here with such great ideas like you report on in the magazine, and we&#39;re doing the same thing, but on stage. (continued on page 45)

Southwest Michigan's Magazine: Meet the siblings piloting RAI Jets success, local horseshoe club is ringing up fun, what do jam and popcorn have to do with each other?, K'zoo Folklife and more!