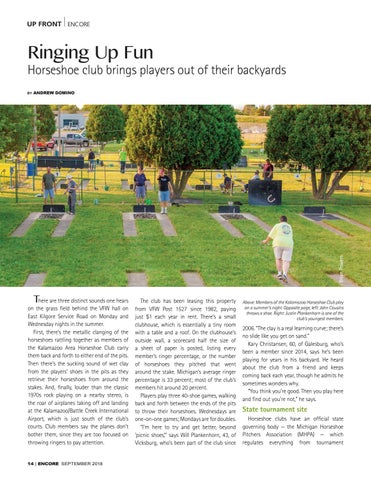 Horseshoe club brings players out of their backyards ANDREW DOMINO

There are three distinct sounds one hears

on the grass field behind the VFW hall on East Kilgore Service Road on Monday and Wednesday nights in the summer. First, there’s the metallic clanging of the horseshoes rattling together as members of the Kalamazoo Area Horseshoe Club carry them back and forth to either end of the pits. Then there’s the sucking sound of wet clay from the players’ shoes in the pits as they retrieve their horseshoes from around the stakes. And, finally, louder than the classic 1970s rock playing on a nearby stereo, is the roar of airplanes taking off and landing at the Kalamazoo/Battle Creek International Airport, which is just south of the club’s courts. Club members say the planes don’t bother them, since they are too focused on throwing ringers to pay attention. 14 | ENCORE SEPTEMBER 2018

The club has been leasing this property from VFW Post 1527 since 1982, paying just $1 each year in rent. There’s a small clubhouse, which is essentially a tiny room with a table and a roof. On the clubhouse’s outside wall, a scorecard half the size of a sheet of paper is posted, listing every member’s ringer percentage, or the number of horseshoes they pitched that went around the stake. Michigan’s average ringer percentage is 33 percent; most of the club’s members hit around 20 percent. Players play three 40-shoe games, walking back and forth between the ends of the pits to throw their horseshoes. Wednesdays are one-on-one games; Mondays are for doubles. “I’m here to try and get better, beyond ‘picnic shoes,’” says Will Plankenhorn, 43, of Vicksburg, who’s been part of the club since

Above: Members of the Kalamazoo Horseshoe Club play on a summer’s night. Opposite page, left: John Cousins throws a shoe. Right: Justin Plankenhorn is one of the club’s youngest members.

2006. “The clay is a real learning curve; there’s no slide like you get on sand.” Kary Christansen, 60, of Galesburg, who’s been a member since 2014, says he’s been playing for years in his backyard. He heard about the club from a friend and keeps coming back each year, though he admits he sometimes wonders why. “You think you’re good. Then you play here and find out you’re not,” he says.