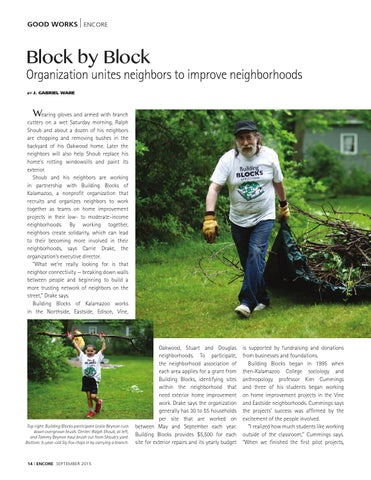 earing gloves and armed with branch cutters on a wet Saturday morning, Ralph Shoub and about a dozen of his neighbors are chopping and removing bushes in the backyard of his Oakwood home. Later the neighbors will also help Shoub replace his home’s rotting windowsills and paint its exterior. Shoub and his neighbors are working in partnership with Building Blocks of Kalamazoo, a nonprofit organization that recruits and organizes neighbors to work together as teams on home improvement projects in their low- to moderate-income neighborhoods. By working together, neighbors create solidarity, which can lead to their becoming more involved in their neighborhoods, says Carrie Drake, the organization’s executive director. “What we’re really looking for is that neighbor connectivity — breaking down walls between people and beginning to build a more trusting network of neighbors on the street,” Drake says. Building Blocks of Kalamazoo works in the Northside, Eastside, Edison, Vine,

Oakwood, Stuart and Douglas neighborhoods. To participate, the neighborhood association of each area applies for a grant from Building Blocks, identifying sites within the neighborhood that need exterior home improvement work. Drake says the organization generally has 30 to 55 households per site that are worked on between May and September each year. Building Blocks provides $5,500 for each site for exterior repairs and its yearly budget

is supported by fundraising and donations from businesses and foundations. Building Blocks began in 1995 when then-Kalamazoo College sociology and anthropology professor Kim Cummings and three of his students began working on home improvement projects in the Vine and Eastside neighborhoods. Cummings says the projects’ success was affirmed by the excitement of the people involved. “I realized how much students like working outside of the classroom,” Cummings says. “When we finished the first pilot projects,