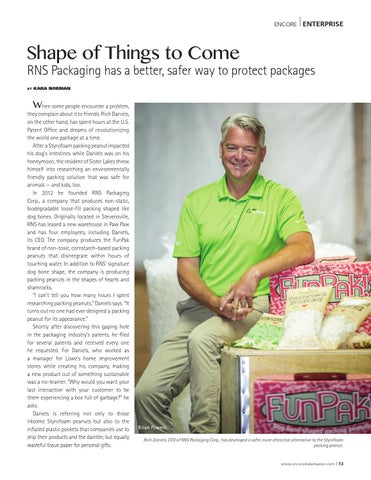 Shape of Things to Come

RNS Packaging has a better, safer way to protect packages by

hen some people encounter a problem, they complain about it to friends. Rich Daniels, on the other hand, has spent hours at the U.S. Patent Office and dreams of revolutionizing the world one package at a time. After a Styrofoam packing peanut impacted his dog’s intestines while Daniels was on his honeymoon, the resident of Sister Lakes threw himself into researching an environmentally friendly packing solution that was safe for animals — and kids, too. In 2012 he founded RNS Packaging Corp., a company that produces non-static, biodegradable loose-fill packing shaped like dog bones. Originally located in Stevensville, RNS has leased a new warehouse in Paw Paw and has four employees, including Daniels, its CEO. The company produces the FunPak brand of non-toxic, cornstarch-based packing peanuts that disintegrate within hours of touching water. In addition to RNS’ signature dog bone shape, the company is producing packing peanuts in the shapes of hearts and shamrocks. “I can’t tell you how many hours I spent researching packing peanuts,” Daniels says. “It turns out no one had ever designed a packing peanut for its appearance.” Shortly after discovering this gaping hole in the packaging industry’s patents, he filed for several patents and received every one he requested. For Daniels, who worked as a manager for Lowe’s home improvement stores while creating his company, making a new product out of something sustainable was a no-brainer. “Why would you want your last interaction with your customer to be them experiencing a box full of garbage?” he asks. Daniels is referring not only to those irksome Styrofoam peanuts but also to the inflated plastic pockets that companies use to ship their products and the daintier, but equally wasteful tissue paper for personal gifts.