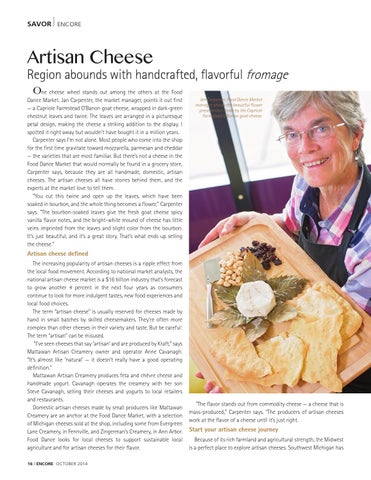 Region abounds with handcrafted, flavorful fromage One cheese wheel stands out among the others at the Food

Dance Market. Jan Carpenter, the market manager, points it out first — a Capriole Farmstead O’Banon goat cheese, wrapped in dark-green chestnut leaves and twine. The leaves are arranged in a picturesque petal design, making the cheese a striking addition to the display. I spotted it right away but wouldn’t have bought it in a million years. Carpenter says I’m not alone. Most people who come into the shop for the first time gravitate toward mozzarella, parmesan and cheddar — the varieties that are most familiar. But there’s not a cheese in the Food Dance Market that would normally be found in a grocery store, Carpenter says, because they are all handmade, domestic, artisan cheeses. The artisan cheeses all have stories behind them, and the experts at the market love to tell them. “You cut this twine and open up the leaves, which have been soaked in bourbon, and the whole thing becomes a flower,” Carpenter says. “The bourbon-soaked leaves give the fresh goat cheese spicy vanilla flavor notes, and the bright-white mound of cheese has little veins imprinted from the leaves and slight color from the bourbon. It’s just beautiful, and it’s a great story. That’s what ends up selling the cheese.”

Artisan cheese defined The increasing popularity of artisan cheeses is a ripple effect from the local food movement. According to national market analysts, the national artisan cheese market is a $16 billion industry that’s forecast to grow another 4 percent in the next four years as consumers continue to look for more indulgent tastes, new food experiences and local food choices. The term “artisan cheese” is usually reserved for cheeses made by hand in small batches by skilled cheesemakers. They’re often more complex than other cheeses in their variety and taste. But be careful: The term “artisan” can be misused. “I’ve seen cheeses that say ‘artisan’ and are produced by Kraft,” says Mattawan Artisan Creamery owner and operator Anne Cavanagh. “It’s almost like ‘natural’ — it doesn’t really have a good operating definition.” Mattawan Artisan Creamery produces feta and chèvre cheese and handmade yogurt. Cavanagh operates the creamery with her son Steve Cavanagh, selling their cheeses and yogurts to local retailers and restaurants. Domestic artisan cheeses made by small producers like Mattawan Creamery are an anchor at the Food Dance Market, with a selection of Michigan cheeses sold at the shop, including some from Evergreen Lane Creamery, in Fennville, and Zingerman’s Creamery, in Ann Arbor. Food Dance looks for local cheeses to support sustainable local agriculture and for artisan cheeses for their flavor. 16 | Encore OCTOBER 2014

“The flavor stands out from commodity cheese — a cheese that is mass-produced,” Carpenter says. “The producers of artisan cheeses work at the flavor of a cheese until it’s just right.

Start your artisan cheese journey Because of its rich farmland and agricultural strength, the Midwest is a perfect place to explore artisan cheeses. Southwest Michigan has

Southwest Michigan's magazine: the best stories and images of the greater Kalamazoo community.