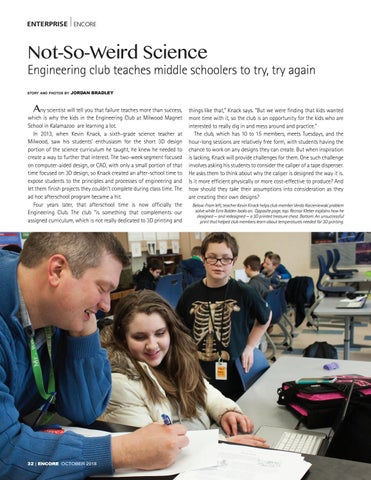 ny scientist will tell you that failure teaches more than success, which is why the kids in the Engineering Club at Milwood Magnet School in Kalamazoo are learning a lot. In 2013, when Kevin Knack, a sixth-grade science teacher at Milwood, saw his students’ enthusiasm for the short 3D design portion of the science curriculum he taught, he knew he needed to create a way to further that interest. The two-week segment focused on computer-aided design, or CAD, with only a small portion of that time focused on 3D design, so Knack created an after-school time to expose students to the principles and processes of engineering and let them finish projects they couldn’t complete during class time. The ad hoc afterschool program became a hit. Four years later, that afterschool time is now officially the Engineering Club. The club “is something that complements our assigned curriculum, which is not really dedicated to 3D printing and

things like that,” Knack says. “But we were finding that kids wanted more time with it, so the club is an opportunity for the kids who are interested to really dig in and mess around and practice.” The club, which has 10 to 15 members, meets Tuesdays, and the hour-long sessions are relatively free form, with students having the chance to work on any designs they can create. But when inspiration is lacking, Knack will provide challenges for them. One such challenge involves asking his students to consider the caliper of a tape dispenser. He asks them to think about why the caliper is designed the way it is. Is it more efficient physically or more cost-effective to produce? And how should they take their assumptions into consideration as they are creating their own designs? Below: From left, teacher Kevin Knack helps club member Verda Korzeniewski problem solve while Ezra Balden looks on. Opposite page, top: Reznor Kleber explains how he designed — and redesigned — a 3D printed treasure chest. Bottom: An unsuccessful print that helped club members learn about temperatures needed for 3D printing.