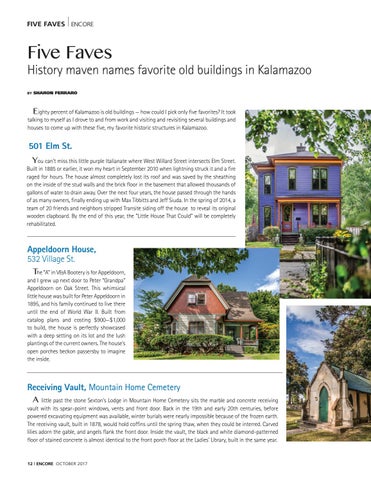 Eighty percent of Kalamazoo is old buildings — how could I pick only five favorites? It took

talking to myself as I drove to and from work and visiting and revisiting several buildings and houses to come up with these five, my favorite historic structures in Kalamazoo.

501 Elm St. You can’t miss this little purple Italianate where West Willard Street intersects Elm Street. Built in 1885 or earlier, it won my heart in September 2010 when lightning struck it and a fire raged for hours. The house almost completely lost its roof and was saved by the sheathing on the inside of the stud walls and the brick floor in the basement that allowed thousands of gallons of water to drain away. Over the next four years, the house passed through the hands of as many owners, finally ending up with Max Tibbitts and Jeff Siuda. In the spring of 2014, a team of 20 friends and neighbors stripped Transite siding off the house to reveal its original wooden clapboard. By the end of this year, the “Little House That Could” will be completely rehabilitated.

Appeldoorn House, 532 Village St. The “A” in V&amp;A Bootery is for Appeldoorn, and I grew up next door to Peter “Grandpa” Appeldoorn on Oak Street. This whimsical little house was built for Peter Appeldoorn in 1895, and his family continued to live there until the end of World War II. Built from catalog plans and costing $900—$1,000 to build, the house is perfectly showcased with a deep setting on its lot and the lush plantings of the current owners. The house&#39;s open porches beckon passersby to imagine the inside.

little past the stone Sexton’s Lodge in Mountain Home Cemetery sits the marble and concrete receiving vault with its spear-point windows, vents and front door. Back in the 19th and early 20th centuries, before powered excavating equipment was available, winter burials were nearly impossible because of the frozen earth. The receiving vault, built in 1878, would hold coffins until the spring thaw, when they could be interred. Carved lilies adorn the gable, and angels flank the front door. Inside the vault, the black and white diamond-patterned floor of stained concrete is almost identical to the front porch floor at the Ladies&#39; Library, built in the same year.