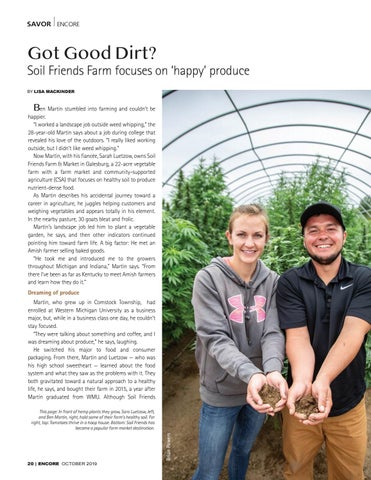 en Martin stumbled into farming and couldn’t be happier. “I worked a landscape job outside weed whipping,” the 28-year-old Martin says about a job during college that revealed his love of the outdoors. “I really liked working outside, but I didn’t like weed whipping.” Now Martin, with his fiancée, Sarah Luetzow, owns Soil Friends Farm &amp; Market in Galesburg, a 22-acre vegetable farm with a farm market and community-supported agriculture (CSA) that focuses on healthy soil to produce nutrient-dense food. As Martin describes his accidental journey toward a career in agriculture, he juggles helping customers and weighing vegetables and appears totally in his element. In the nearby pasture, 30 goats bleat and frolic. Martin’s landscape job led him to plant a vegetable garden, he says, and then other indicators continued pointing him toward farm life. A big factor: He met an Amish farmer selling baked goods. “He took me and introduced me to the growers throughout Michigan and Indiana,” Martin says. “From there I’ve been as far as Kentucky to meet Amish farmers and learn how they do it.” Dreaming of produce Martin, who grew up in Comstock Township, had enrolled at Western Michigan University as a business major, but, while in a business class one day, he couldn’t stay focused. “They were talking about something and coffee, and I was dreaming about produce,” he says, laughing. He switched his major to food and consumer packaging. From there, Martin and Luetzow — who was his high school sweetheart — learned about the food system and what they saw as the problems with it. They both gravitated toward a natural approach to a healthy life, he says, and bought their farm in 2015, a year after Martin graduated from WMU. Although Soil Friends